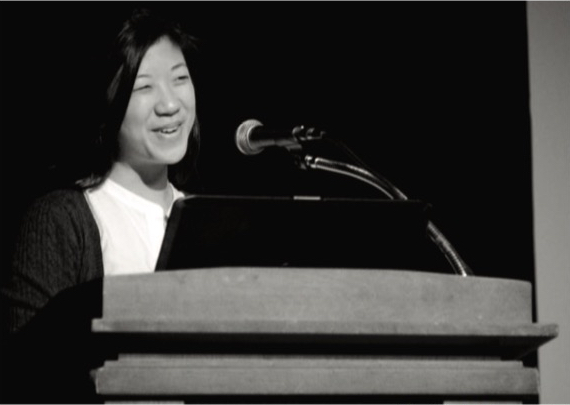 Journalist Alice Su visited LaGuardia Community College on Wednesday March 11 to enlighten students on her reporting of Middle Eastern refugees living in neighboring countries, during the launch of the college’s partnership with the Pulitzer Center of Crisis Reporting.

LaGuardia Community College became a partner in the Pulitzer Center’s Campus Consortium, which includes more than 20 institutions of higher education, of which LaGuardia is only the second Junior College – along with Westchester Community College.

Twenty-three-year-old Alice Su took the stage at LaGuardia’s Little Theatre at 3:00pm; she spoke about her two years of in-depth reporting as part of her project for the Pulitzer Center. Su’s work covers the life and struggles of refugees living in Jordan and Lebanon and heavily focuses on Syrian refugees who migrated to these neighboring countries after the spawn of a war in their nation.

Ms. Su discussed the gravity of the refugee situation by introducing refugee camps in her presentation. On a projector screen, she showed photographs of Camp Azraq in Jordan, which is composed of steel shelters that contain a few mats, but not much else. Worse than the poor accommodations, the bathrooms offered at the camps are simply out-houses with holes dug in the ground.

Ms. Su pointed out that when Syrians first arrive at the camps they feel relief because they are no longer exposed to the dangers of their country. Some say that they risk being shot on their journey across the border; hence, they are grateful for the sanctuary, however, once the refugees have spent an extended period of time at the Azraq camp, they are faced with a new problem.

“There is nothing to do in those camps, the refugees are just living off the aid,” Su said, “They are essentially stuck in a camp in the middle of the desert, so these people actually don’t want to stay there.”

During her time in Jordan, Su focused her reporting on urban refugees – those who live within the urban parts of Jordan and Lebanon – because 84 percent of Syrian refugees do not live in refugee camps.

Ms. Su assured the audience that living in urban areas allows refugees to be in greater control of their lives: they can choose where they live and they are allowed to roam freely. Yet, living in these areas has its disadvantages.

“The difficult part is that living in an urban area requires refugees to pay rent, electricity, food and medical expenses,” Su said. “But I think the most crucial problem is that there is no right to work. Refugees are not legally allowed to make an income.”

Not being allowed to work results in an enormous struggle for these people, Su said as she began to provide examples of refugees who find informal ways of making money. She shared, with her audience, the photograph of a group of Sudanese refugees who live together in a single room. Su claimed the group is composed of approximately 30 men who go out every day to seek informal work in construction or cleaning. At the end of the day, the men combine their earnings and purchase lentils or beans to eat together.

After providing several examples of refugees who are adversely affected by the constraints of not being able to legally work, Su explained that the United Nations High Commissioner for Refugees (UNHCR), was severely underfunded. In 2014, the UNHCR appealed for 3.7 billion dollars, but they were only granted 61 percent of that, leaving a 1.48 billion dollar gap. But lack of wanting to assist the refuges is not the reason for this gap, Su stated. The problem is the high volume of crises occurring all at once.

“We have ISIS causing a huge displacement issue in Iraq, we have Ebola and the Philippines – which still need a lot of money,” she said. “With all these disasters happening, the system is under

unprecedented strains, unable to sustain everyone who is in need.”

Ms. Su added that the lack of funding for refugee aid has led to a discontinuation of food coupons and free healthcare. These setbacks have caused people to pursue illegal ways of obtaining income – such as drug trafficking, child labor, and prostitution.

It was not Su’s mission to make her audience believe that all refugees are helpless victims. She assured that most of the refugees she has encountered do not want to receive more aid from UNHCR. Instead, they want to be able to work and support themselves, while contributing to their new communities, she said.

Su brought shared examples of people who are coping well by seeking informal work. One of these was Fadia, an Iraqi woman who creates accessories from second hand leather that she receives from companies. She then sells these accessories to tourists.

“What these people want most of all is not pity; it is support and opportunities: to find a way to find to work so that they could support themselves and their families,” Su said. “And perhaps in the future they can return to their places of origin and help these countries.”

Ms. Su was later joined by Jehangir Khattak, Senior Editor of the Center for Community and Ethnic Media at the CUNY Graduate School of Journalism, to further discuss refugee issues.

Mr. Khattak took this opportunity to ask Su what her thoughts were on the quality of the coverage of the Syrian refugee crisis in other countries, such as the United States. Ms. Su replied that there has to be an increase regarding in-depth reporting.

“We have a lot of reporters who will come to write a quick and emotional piece,” Ms. Su said. “But what we need are pieces that can question how the policies and systems are working and how we can improve them.”

Director Sawyer described the project as “something that [the reporter] must be passionate about.” He urged those who were interested to find their equivalent of Alice Su’s “Refugee Survival in Jordan and Lebanon,” and to write about it.

View all posts by Angel Rodriguez →