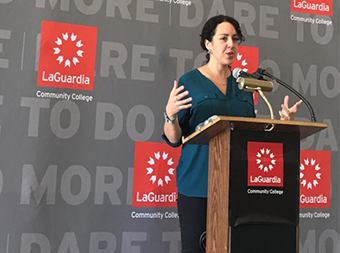 An empowering event – the Latinx Culture Symposium – took place on April 7th at the EBuilding, Poolside Caf. with a crowd of more than 125 to hear a speech from Angie Cruz, an Assistant Professor of English at the University of Pittsburgh, founder and editor of Aster(ix) and author of two novels: Soledad and Let It Rain Coffee.

The event was hosted by the English Department’s Latina/o Literature Committee and e Women’s Center, with its goal, “the celebrate the Latinx culture, scholarships and students on campus,” as Dr. Sonia Rodgirguez, one of the hosts of the event, described it. Creative readings and presentations were done by some of the CUNY faculty and graduates and students. “The different panels were an attempt to create different conversations, and to give students and opportunity to either learn about Latinx culture or to talk about their experiences,” Dr. Rodriguez said.

The event kicked off with Dr. Joyce Sanchez-Taylor, one of the main hosts of the event and co-chair of the English Departments Latina/o Literature Committee, who introduced the keynote speaker, Angie Cruz. Ms. Cruz talked about a wide range of subjects, from the commitment she had to the Latin community to solutions for global problems. She read from a forthcoming book, Domincana. which was inspired by her mothers constrained life.

“I write for my community. You are my community,” Ms. Cruz told the crowd of students, faculty, and staff at the beginning of her speech. Much of the speech was a recall from Ms. Cruz’s life growing up in Washington Heights. Ms. Cruz said that the roots of her activism in writing came from her “commitment to community,” which she learned from her mother.

The recollection of Ms. Cruz’s mother taking responsibility for cleaning their apartment building and not waiting for others to do it, the “consistent act of kindness” her mother would do for their neighbors by picking up other people’s litter as well as sharing their leftovers with the poor, set the level of expectations for Ms. Cruz, even if the implied expectation for her was to “not get pregnant and only go to school.” Ms. Cruz learned to always strive hard; she is the first to hold a college degree in the family and proved that her hard work was worth it.

Ms. Cruz decided not to take a job after graduating from college with a degree in English literature which raised a few eyebrows in her family. Instead, she decided that she wanted to go to school and pursue creative writing. Her mother questioned her decision and back then she didn’t know the answer, but Ms. Cruz knethat writing was something that she wanted to do. Ms. Cruz said, “I felt this urgency to tell my story, the story that I was witnessing that I felt was not being represented in the media or in the books.” Ms. Cruz’s stories about living in Washington Heights surrounded by Dominican families is later reflected in her first book, Soledad.

Although it took Ms. Cruz 15 years to finally get a job with benefits which her audience applauded to, the job she now enjoys at University of Pittsburgh, it was “a big deal” for Ms. Cruz because she was the first Latin woman working at the University. “Everywhere I go, I’m still the first, the first Latina, ” said Ms. Cruz. She realized that even if things kept changing and communities were growing, the possibilities are harder to imagine for people with her racial background.

Ms. Cruz later recalled her recent encounter with a representative of the United Nations who asked her to offer a possible solution to a world problem. She said that people need to read and write more fiction to fight world problems. Ms. Cruz recounted that politicians and world leaders laughed at her suggestion at the UN conference, but then went away all happy and excited when learning about her reasoning as to why writing and reading fiction are so important.

The writing workshop which Ms. Cruz did in Haiti—a country that has often suffered from hurricanes and earthquakes–was one of the profound examples of why writing and reading fiction was important when one has faced such hard circumstances.

Ms. Cruz asked students to write about a nonfictional future but students became depressed and confused as they couldn’t imagine their lives ever changing from negative to positive. She recalled that one student said to her, “is is our life, a hopeless situation.” When she asked them to write a fictional future, the students became optimistic. According to Ms. Cruz, they escaped the reality for a moment.

Ms. Cruz recounted that writing fiction became a refuge of hope for students and it gave them the strength to search for solutions and to stay positive. e students also loved reading fictional literature where they learned they were not alone in a world filled with problems, and that they can always find ways to get rid of issues they face. Ms. Cruz added that “writing and reading fiction can make possible what feels like the impossible.”

In the last part of her speech, Ms. Cruz read the soon-to-be published book Dominicana, where a story was evoked by her mother’s early marriage at 15 with her 32-year-old father. The story travels down memory lane about Ms. Cruz’s grandmother who sacrificed her daughter’s life to attain a better life for the whole family: they needed a visa to get to America. It’s the kind of story that exists even today, yet nobody wants to talk about it.

As Ms. Cruz said, “Many of our family members go through things in life they end up never talking about—it’s a problem of a culture.” Ms. Cruz recalled that her mother was in such a difficult position all her life and was severely and emotionally constrained.

When Ms. Cruz asked her mother to name one impossible thing she could not do in her life, her mother answered that she could never imagine falling in love. Ms. Cruz recalled how shocked she was at her mother’s answer because they weretotal opposites, “I fall in love every other week!” said Ms. Cruz, which was accompanied with a loud applause from the audience.

“My book is historical, set in 1965, and I always tend to humanize all my characters,” Ms. Cruz said. It’s a book where women are placed in situations where they constantly resisted as much as they could. In one scene of her book she read, “I am a good man, trust me. When someone tells you ‘trust me’–don’t.” To Ms. Cruz, writing Dominicana was her magical way to transform her mother’s story into a fictional and optimistic alternative set of events. It’s the kind of story that gives hope to people who endure a constrained situation where there’s always an opportunity to fall in love.

A Brief Q & A with Angie Cruz

You mentioned on your speech that it took you 15 years to get a job with benefits after college, what motivated you to still pursue the artisticpath, and to continue working towards it even if it took a longer process to get to where you are today? Did you know that it would take a longer process? In between those times, what kept you moving, and what are the fun parts?

I’ve always worked. I started working when I was 12 at a local store cleaning up after people. And soon after I was working in stores as a cashier, then a salesperson, etc. So although I didn’t have a job with benefits, I knew from all those years working that I would find a way to survive. But of course this choice to become a writer worried my family because they wanted me to have job security. But even when they worried, they were extremely supportive. ey came to my readings. For graduation my mother bought me an ergonomic chair for my desk because she knew that’s where I would spend a lot of my time. And that motivated me. But the urgency to write came from my feeling that I had a story to tell that hadn’t been told, about the community I live in, and about the things I had witnessed. So I don’t really see that my process is longer or less time than any other given writer. I also don’t think I have arrived in any way now that I have more job security. I just always have tried for and continue to try for a life where I am free to do what I want. At this moment in my life, I love writing, I love teaching, and I also enjoy editing the journal I founded, Aster(ix). So in many ways I am still in the process of making and figuring things out. The most fun parts are so many. Often I am asked when I visit high schools especially, if I am rich, or are writers rich. And my response, although I am sure it’s not satisfying for consumer driven teens, is that my life is rich. Through the writing I have been able to travel to lots of different countries and meet so many interesting people. I have more control over my time and I how use it more than most people I know. All of this is more important for me than material wealth. So the fun parts are definitely being invited to a new place. And also I very much enjoy spending hours with my computer on my lap inventing a world on the page.

That’s a great question. On a personal level I have become very aware how the language we use every day has power and can lift or hurt a person. And if we can manage to articulate ourselves we can really touch people. On the page I understood this through reading. As an undergraduate when I started reading books by James Baldwin, Audre Lorde and Gloria Anzaldua, I felt as if their words were giving me a land to stand on.

Just for a fun question, as a writer, what would you choose as your spirit animal?

An elephant. ey are loyal and take care of their community. They also have this regal and magical presence about them. I never get tired of looking at them.