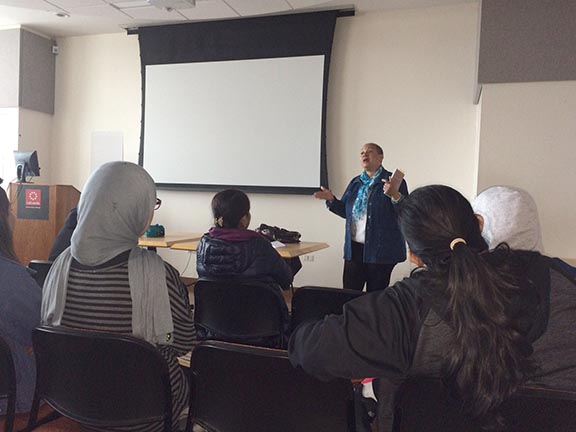 People like to know that what they’re doing is the right thing, but when Maria Aponte visited LaGuardia on March 31 for an interactive poetry workshop, she made the audience realize that your writing is not about “doing the right thing,” but about allowing yourself to heal.

Ms. Aponte is not just a poet but also a performance artist, a community arts activist, and an educator. She works in Latino Theatre to fight against racial discrimination and to stand up for women’s rights. She has written two books and a one-woman show, Lagrimas de mis Madres. In May 2013 her book Transitions of a Nuyorican Cinderella won Second Place for Best Poetry in English at the International Latino Book Awards.

Ms. Aponte, who is also the founder of “Latina 50 Plus™, a program honoring Latina Pioneers, was selected as one of the 25 Bronx Influential Women for 2016 by the Bronx Times.

She came to LaGuardia to read from her new memoir The Gift of Loss.

“Humanity is losing its humanity,” she told the 28- member audience. “You’re not allowed to have an opinion anymore.”

Ms. Aponte started the workshop telling the audience her backstory: She grew up as an only child in New York City during the 1960’s. From the age of nine to sixteen, she was a caretaker for her ailing mother. Her father was a drunk, whom she seldom saw.

The last memory that Ms. Aponte has of her parents together is the night of her Sweet Sixteen birthday. Her mother in a wheelchair, carrying an oxygen tank, checked herself out of the hospital to ensure that her daughter would have a memorable birthday. And that she did.

When Ms. Aponte saw that her father was not only there but on stage at the party, she was, of course, worried as to what was about to happen. Like any other child of a parent who drinks she never believed her father when he said he played timbales. Surprisingly, it turned out that his rhythmic claims were true. After his set, he and Ms. Aponte’s mother danced with each other for the last time. Her mother died one month later.

“How do we deal with death?” is is was the question Ms. Aponte posed to the audience. Her answer? Acceptance.

But how do you reach acceptance? Stay busy: unfortunately acceptance does not happen right away, Ms. Aponte said. You may not even want to accept this tragedy at first. That is okay, she added. Be okay with what you feel and how you feel it. If you’re angry be angry, if you’re sad be sad. No feelings are wrong feelings.

Ms. Aponte read four pieces from the 118-page memoir: “In Rhythm,” “Instructions,” “Tattoo,” and “Five Years.” “Tattoo” refers to her father who tattooed her birthdate on his body. While she thought it was sweet of him to do that, she was left wondering “Why not my name?”

The cover of The Gift of Loss is a series of photos of her parents from the 1950’s-70. In an interview with The Bridge, Ms. Aponte said that she originally wanted Mia Roman who illustrated her first book Transitions of a Nuyorican Cinderella to design the cover of her new book as well. But, after going through her manuscript, Ms. Roman insisted that the cover had to be made up of photographs.

After her reading Ms. Aponte asked the audience to write using the prompt: “If I had a moment to tell something, this is what I would tell you:” She gave the room about ten minutes to write out their thoughts, which was followed by volunteers who chose to read their responses aloud.

After the workshop this reporter met with Ms. Aponte for an interview in the Women’s Center thanks to Professor Joanna De Leon, the Center’s Director.

Ms. Aponte said that she decided to self-publish because it allows her to put everything that she wants in her books, which includes switching between English and Spanish multiple times in a single story. It also allows her to keep her “cultural voice alive”

She recommends for all those beginning to enter the world of writing and to those looking to publish to go out and make connections with everyone you possibly can. ey should not shy away from their critics; they should embrace what they say and learn how to turn what they say into creative energy, she said.

Ms. Aponte revealed that she is considering bringing back to the stage, Lagrimas de mis Madres, her one woman show about the women in her family, in the upcoming year. She has been told by friends that the people of today need to hear her story.

View all posts by Gabrielle Abreu →