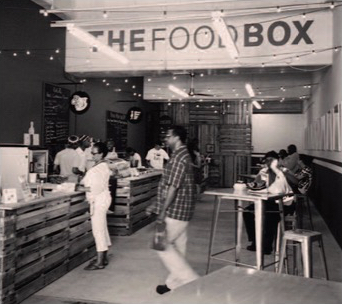 Not many of the students here at LaGuardia know about the best kept secret located just across the street in the Falchi Building, The Food Box. The Food Box, which opened almost two years ago, has made a name for itself, a unique market made up of five different artisan food vendors who have now found a permanent home. All of the vendors were once street vendors who participated in the Long Island City Flea markets in the past and were invited to be a part of the Food Box by Jamestown Properties (who are also responsible for the Chelsea Market). The Food Box is open from as early as 6:30am- 5pm Mondays through Fridays, is closed on weekends, and is very convenient for those who work in the Falchi Building and those few students who actually know it exists. Seating is limited especially during lunch, but if you do get a chance to snatch a seat you’ll be glad to hear they have WiFi. Seating is also available outside of the Falchi Building, quite a hit during the summer time.

The best thing about this place is that it offers a variety of choices for lunch, and if you know the area at all you’ll know that this particular part of Long Island City is very limited. The Food Box offers Caribbean food at ReCaFo, Thai food at Khao Man Gai NY, Empanadas & coffee at Karu Café, Soup & Sandwiches at Mrs. Soupy, and also dessert at Made From Scratch Dessert Bar. All of the vendors are inexpensive and some even offer students deals if you show your student ID. When you don’t have much time between classes, and you are starving beyond belief, what could get better than a place like The Food Box.

I have only had the chance to try the chicken & beef patties from ReCaFo so far, and they were both delicious. Both have a little spice in them, though not enough to over power the other flavors, and they only cost $2.50. I’ve also had their Jamaican Ginger Beer (soda), and it paired perfectly with the patty. Although I have not had the chance to eat the rest of the food they offer, I’ve heard that everything else they sell is just as delicious. I had already assumed this because everytime I am in the mood for Caribbean food and I stop by, the food is sold out.

I have also had a chance to try the empanadas & coffee at Karu Café. The coffee was perfect for someone like me – who does not like my coffee too strong but not too light either. It also beats a lot of the coffee that I have had in the past in this area of Long Island City. The empanadas were out of the ordinary; which I loved. I’ve had the sweet corn & cheese and the spinach & ricotta. To my surprise the sweet corn & cheese actually had corn inside (I had assumed the sweet corn meant the patty itself), but the surprise was welcomed and the balance was great. Although, my favorite had to be the spinach & ricotta, perfectly balanced and also including pieces of tomato that enhanced the already flavorful combination. Keep in mind Karu Café only accepts cash and does not have a student special as of yet, but the owner has it in mind from a brief conversation I had with him previously – he is also a student here at LaGuardia studying business. Be sure to ask for the green sauce if you stop by, it’s the perfect topping.

The last vendor I have had the pleasure to pay a visit to is Khao Man Gai NY the Thai food vendor. Owned by a couple, these two are doing an exceptional job. The menu is limited, but I’ve heard that each is “as good as it gets”. They’ve even won an award from Vendy for being the Best Market Vendor in 2013. I’ve had their Tom Yum Noodles (w/ no broth) and being a huge fan of noodles I have to say these were great! Cost $8 which might be a bit overpriced due to the portion size, which was good, but not great. Although, due to its abundance in flavor, it might be enough to fill you up depending on who you are. I paired the noodles with their Thai Iced Tea, and I have to say they serve one of the best Thai teas I have ever had. Good Thai tea isn’t too sweet and this place nailed that fact. Thai Tea costs $3, but keep in mind with your school ID they are only $1.