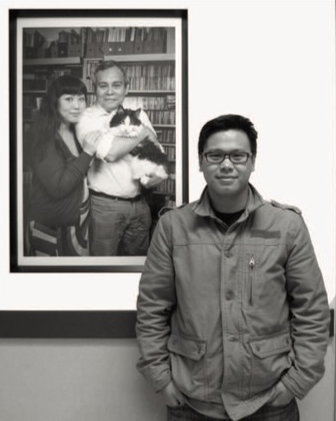 The Family Of LaGuardia photography exhibition had its opening ceremony last year on October 16th. Located on the 3rd floor of the B Building, LaGuardia’s Gallery Of Photographic Arts exhibition had great feedback. Scott Sternbach, the photography program director, and program faculty members Lidiya Kan, Javier Larenas, and Sarah Midkiff all had a part in its success and the decision-making behind it.

A few years ago the photography department had a similar exhibition called “The Faces of LaGuardia,” which was strictly focused on only the students. Ms.Kan said that since then, the photography department had this project in mind. The rules were to photograph anyone the students considered as “family” of our school, including classmates, school faculty, staff, and their own families and friends. “We specified that we didn’t want it limited to just students,” she explained.

The photography department had been working on this project since the beginning of the Fall 2013 semester, but only started taking submissions the following spring. Seventy-two entries were submitted by more than 40 students and 80 percent of what was submitted was actually chosen to then print and put on display. This project was not only open to students in the commercial photography program, but also open to those who were taking a photography class at the time. Some of the students who entered are now alumni.

Andrias Nicho Nugraha was a commercial photography major at LaGuardia who graduated in Fall II 2015. This was Andrias first exhibition, to which he submitted four photographs of which two were chosen. Using his Canon 5D Mark II, he only shot his work digitally because his work was unplanned and happened in fortunate ways. “Photography for me is part of being lucky and part of catching the moment in the right time,” he said. Mr. Nugraha is an international student, like many here at LaGuardia, and lives with his sister. Instead of using his sister as a subject for his photographs, he decided to take this project as an opportunity to get to know some of his classmates and school peers better.

One of his photographs that was chosen is of a fellow commercial photography major he spent the day with and then later discovered had a different talent not many knew of, painting. He decided to focus his work around that and photograph her in her natural habitat: her home,

holding one of her paintings. Mr. Nugraha explained that he found her home and its colors very interesting and unique and decided her living room was the perfect frame to take the picture. Not only because all of the colors connected and balanced off of each other, but also because of the family portrait hanging on the wall next to her. “People aren’t always like you see them in pictures,” he said. He wanted his photograph to show that difference, that she was more than what you would have seen in the family photo.

Mr. Nugraha also photographed a friend who is also a student and Japanese tutor at LaGuardia. He spent the afternoon with her along with her husband, and their cat. He enjoyed getting to know their family and decided to also photograph them in their natural habitat, home. He explains that he likes to make a connection with the people he takes portraits of. He likes them to feel comfortable because that comfort is depicted in the photograph. That particular portrait, he laughs, was the only one he had taken before their cat freaked out after that first flash. He was lucky.

Inspired by famous photographers, their fellow students, and what they have taken from the Commercial Photography program and/or their photography classes, this exhibition definitely displays the department’s hard work and dedication. And, a big portion of the exhibit consists of analog/ film photography, making a majority of the photography black and white. This is due to the photography department pushing film rather than digital the first semester, Mr. Nugraha and Ms. Kan both explained. Mr. Nugraha is the perfect example of the ultimate purpose behind this project. He connected those here at LaGuardia, and showed through photography the bond beyond the classrooms. The Family Of LaGuardia did a fine job at that.