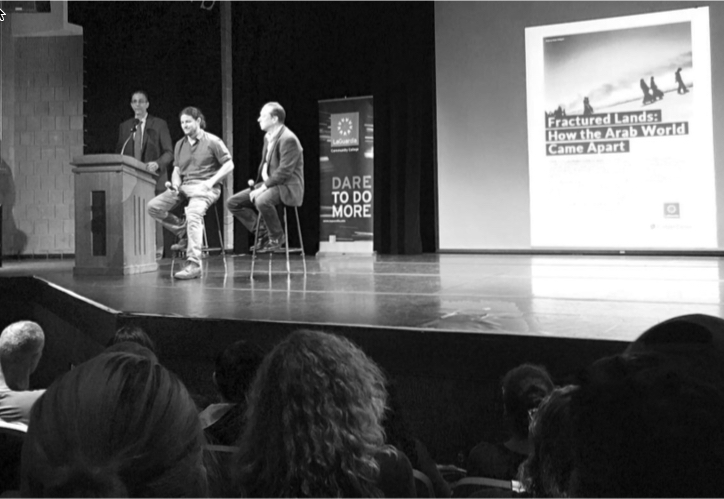 Author Scott Anderson and multimedia journalist Ben Solomon visit LaGuardia Community College on Wednesday, October 19, 2016, to discuss their work for the August 14, 2016 landmark issue of the New York Times Magazine entitled, “Fractured Lands: How the Arab World Came Apart”. The New York Times Magazine dedicated an entire issue to their reporting. It was the first time the magazine has done this for any cover story.

The project was endorsed by the Pulitzer Center of Crisis Reporting’s Catalyst Fund. LaGuardia has established a partnership with the Pulitzer Center that provides a platform in which students and award-winning journalists can engage in thought-provoking dialogue on today’s global issues.

In his 25 years as a war correspondent, Anderson has covered conflicts in Chechnya, Egypt, Israel, Lebanon, Northern Ireland, Sri Lanka and Sudan. He is the author of another book entitled Lawrence in Arabia: War, Deceit, Imperial Folly and the Making of the Modern Middle East. The book, published in 2013, discusses the impact T.E. Lawrence and his unit make in World War I.

Mr. Solomon is a multimedia journalist, documentary filmmaker and foreign correspondent for The New York Times. He contributed to a reporting team with The New York Times in 2015 that won the Pulitzer Prize for international reporting.

This groundbreaking 42,000-word story written by Mr. Anderson along with the intense black- and-white photography by Paulo Pellegrin, followed the lives of six powerful individuals across the Middle East who lived through the invasion of Iraq 13 years ago that lead to the rise of ISIS and the global refugee crisis.

Mr. Solomon showed a clip and then discussed his virtual reality video, “The Fight for Fallujah.” This 360-degree video was taken while Mr. Solomon and his team were embedded with an Iraqi army unit when the unit recaptured Fallujah from ISIS last June. Fallujah is a city in the Iraqi province of Al Anbar, located roughly 69 kilometers west of Baghdad. The Iraqi government lost control of Fallujah to fighters from ISIS in 2014.

Just minutes into the clip, gunshots are heard as ISIS fires right above the heads of the filmmakers and the Iraqi army unit. After the clip, Mr. Solomon said “My goal was to zoom in and see through [the Iraqi army unit] lens of reality and build a bridge from one culture to another.”

The moderator asked Mr. Solomon what he felt America’s biggest misconception about the Middle East was. Mr. Solomon stated, “Fear and worry about Middle Easterns and what happens when they come to America.”

The event was capped with a question and answer portion. Faculty, staff and students were allowed to ask a series of questions to both Mr. Anderson and Mr. Solomon. Out of the ten questions taken by the moderator, six of them were asked by the journalism class of Professor Victor Rosa.

I spoke to Shannon Williams, a student at LaGuardia Community College, and asked what she thought about the event and the work Mr. Anderson and Mr. Solomon did in the Middle East. Williams said “Absolutely amazing. For their unique and outstanding reporting, we were able to step in and see the other side of how our actions, as a government, affected the Middle East.”

If you’d like to read the full article “Fractured Lands: How the Arab World Came Apart”, please visit nytimes.com.