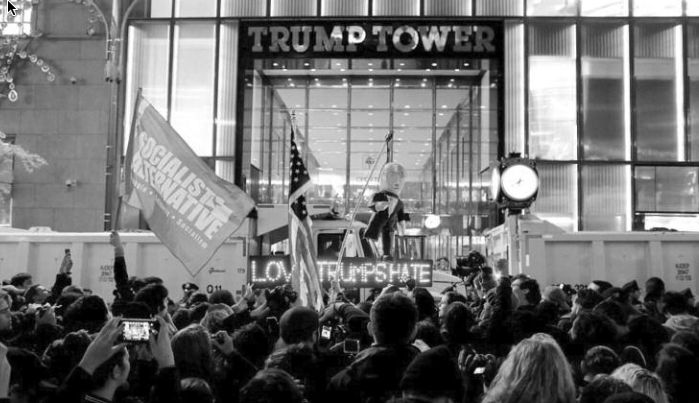 Since the announcement of Donald Trump’s presidential win, thousands of demonstrators have flooded the streets in multiple parts of the country to declare their angst, rage and sorrow about the decision. Throughout the two weeks that have followed the election, protests have taken on a new shape and a more focused purpose. What originally began as an expression of passion against hateful rhetoric, has now morphed into a coalition against systemic racism and the seat it has taken in Washington.

The majority of images that circulated throughout news outlets and social media last week, were those of school walkouts and massive crowds gathered in opposition to the shock of the 2016 election. The stamina of these protests have outlasted the public’s expectations and left many Americans, from liberal and conservative sides, questioning the true objective of resisting results that cannot be changed. “What’s the point of people protesting? Does our vote not count?”, shared an anonymous Trump supporter. “It’s our turn now, give us our chance.”

Although they are surrounded by scrutiny, demonstrators don’t seem to mind the opposition as they have much greater goals at hand. “It originally started as a message against racism and sexism,” said Brian Romero, 26, who organized groups to attend the protests at Trump Tower. “We were letting people know that we won’t stand for this President. We wanted to bring hope with the message that we won’t take this and die.” According to Romero, demonstrators needed almost no convincing to take to the streets as they were motivated enough on their own. Fear and anger could be sensed through the crowds almost like an electric current. “Any animal when backed up into a corner will strike and lash out. That’s just what we did,” added Romero.

Still many citizens disagree with the reasons for the protest, under the belief that race was not an issue during the Trump campaign run. “I don’t understand why people are so scared. We’re not racist just because we voted for him. It’s unfair to give us that label”, said the anonymous Trump supporter. Many are of the opinion that these
public outcries have only served to deepen racial divides.

What neither side can deny is that race is now a discussion on the world stage. This major platform is creating new opportunities for organizations, such as “The People’s Institute for Survival and Beyond”, to re-organize the demonstrations into a larger scale coalition against systemic racism. Romero, who works with the Institute, recognizes that there are numerous challenges toward forming a clear strategy for these efforts. “One of the biggest lessons we learned was don’t underestimate racism or white supremacy. Our goal is to build and sustain a system where our major institutions, including colleges, have removed racism from their roots. We may not see real change until the next generation to come, but we have to work harder now that Trump and his cabinet are now in power,” said Romero.

One major approach used by the Institute is group organization on college campuses. Romero explains that throughout history much of this country’s social progress has been accomplished through college students. Because of this the Institute has provided training, as well as, protest organization within the student body to confront the roles racism plays in our communities. These campus initiatives, which we can expect to become more frequent, have already commenced in schools like Columbia University, Hunter College and Lehman College. “Older generations need to support the youth in these movements, and the youth could stand to learn from their elders that fought for change,” stated Romero.

While many Americans crave a return to normalcy and the end of widespread demonstrations, others like Romero express that life may not be able to feel normal during a Trump presidency. Signaling that this is just the beginning of President-elect Trump’s opposition. “I will never look at him as my President! I would rather die than accept that,” said Romero, which is now the sentimental reality of the new “not so silent” majority.

View all posts by Katrina Colon →