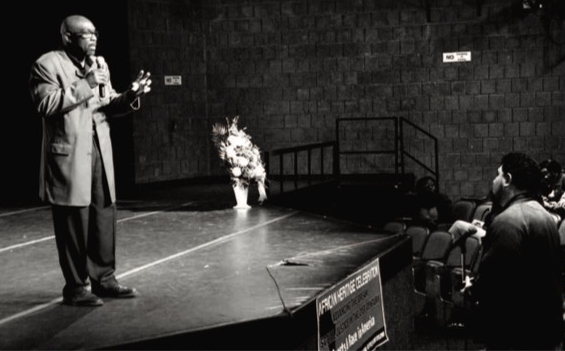 During a question-and-answer session Mr. Wilson conducted with students, faculty and staff, the following exchange occurred between the baseball legend and this reporter.

Wilson: First of all, there are two things we have to understand in this country and that is there is a small percentage of people that really controls this country, and they are the wealthiest people in the world. When you are talking talking finances, there is a financial reward playing in the major leagues. Why didn’t the white guys go to the Negro league? Can you image the white guys going to the Negro league and asking if they could play. You have no idea. It doesn’t matter that their league was better. It is a matter of perception. You would be admitting that you black guys can play better than us. They are not going to do that. You know that. Their goal was not so much to play in the best league, as it was to get the revenue, to get the money that was hiding in the African communities. Jackie Robinson opening the door was a benefit, a byproduct for people like me and everyone else who wants to play major league baseball.

Fernandes: What benefits do you LaGuardia students would get if the school created a baseball team?

Wilson: You would have players with something in common to rally around. Whether they win or lose is not the point. The point is we have a team. This is our team. Something we can get out of class for a little while and cheer. Have you ever been to a college football game, any college game?

It is unbelievable. Two games before the game and two games after the game. It builds character. This is why sports is so good. I love sports. I wrote an article for a blog I did years ago called “Outside the Class Room.” What we learn outside the classroom is as valuable as what we learn inside of it because dealing with outside the classroom is about dealing with people. Because no matter where you go, two and two is four, four and four is eight, eight and eight is sixteen. People change every day in how they learn to associate and adjust to people. It determines how successful we are going to be. I don’t care who you are. You are not in this world by yourself. You got to deal with Whites, Blacks, Puerto Ricans, Dominicans, Indians and Japanese. My point is you have to deal with people. When are you out in a sporting event, guess what? You are going to see all kinds of people; you are going to see people from other schools. You have people dealing with people they even hate. That’s what sports do. So, yes, get a team!

Fernandes: Why did you decide to write a book?

Wilson: I wrote a book because I want my life to mean something, to have some meaning. Look, everybody knows I stole bases for the Mets, but at the end did I really give anybody anything to enrich their life. I mean, my baseball card is going to be the same no matter what you do, but…I grew up in a small town during the Civil Rights Movement, in a spirit of segregation. How did I deal with that to get to where I am today? I’m here speaking at LaGuardia Community College. Can you imagine that I grew up in Bamberg, South Carolina with a population of five hundred people, and here I am. That is news. See what Mookie Wilson can do. If it inspires you, that’s why I wrote it.

View all posts by Jason Fernandes →