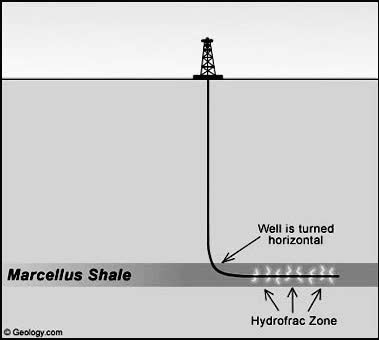 Hydraulic fracturing is a process where companies drill about a mile or more into the ground until they hit shale. During this process 500,000 unknown chemicals are poured into the earth.

According to John Crellin, a student in the chemical biology Ph.D. program at the University of Michigan, “the mixture consists of 99.5 percent sand and water, the other 0.5 percent is made up of something called a “chemical cocktail,” which has anti-corrosive and friction-reducing com- pounds involved.”

Within 20 years methane will contribute to 44 percent of greenhouse gases, with 17 percent of the 44 percent coming from natural gas production. It harms livestock, crops, water supply and people. According to Alternet, millions to even trillions gallons of water are used for each fracking site, and to run active gas wells. Hundreds of thousands of natural gas barrels are produced daily.

Thousands of reports have been filed about community water supplies being contaminated, causing respiratory and neurological damage to young children, adults and babies. As for the drought stressed states, mainly California, Texas and such, 90 percent of water used during the fracking process does not come back. Which means they will eventually run out of water. In the short-term it does create jobs, but how this will affect the environment is not really taken into consideration.

The documentary Gasland, produced by Josh Fox, explains perfectly how hydraulic fracking affects everyone and everything. A resident of Colorado, Mike Markham, shows how the water well is contaminated by natural gases by putting a lighter next to the faucet to set it on fire, showcasing how the environment is affected by the release of methane gas, which damages the climate.

According to an article from energyfromshale.org, “What is Fracking”, fracking has been in use for the past 65 years to extract gas and oil, primarily within the United States. The positive outcomes of fracking will be job creation and increased production of resources, which could make the United States one of the leading suppliers of oil and natural gas.

The Energy Information Agency (EIA) stated in 2012 that gas production was at 40 percent, and by 2040 it will be at 50 percent. One of the major companies behind this is Halliburton, which has headquarters in Houston and Dubai, and manages a workforce of 70,000 employees. Halliburton has gotten away with not having to reveal its “secret formula” thanks to the Halliburton loophole. In 2005 the Clean Water Act was passed under the Bush and Cheney Administration, which allows companies to keep their recipe secret, even if it is life threatening.

Within the United States, areas that are already affected by hydraulic fracking include Pennsylvania, Colorado, Montana, Utah, and California. Currently, legislation is pending in New York to determine whether or not hydraulic fracking should be legalized.

In an email intereview with this reporter, Andy Franze, a hydrogeologist with an M.S. in geochemistry, said: “ Through the process of hydraulic fracking pollution is coming from the truck traffic, deforestation of trees, and a drilling pad. But the amount of surface is minimized since they do horizontal drilling. If the water aquifers are sealed correctly then it is unlikely for water wells to become contaminated. If gas companies want to cut corners then they will do a poor job of sealing up the well, which will result in the water becoming contaminated.”

Another question he answered was on the chemicals used in hydraulic fracking: “Mainly sand, surfactants, biocides, buffers and thousands of more chemicals [are used]. Sand is used so that gas can pass through and biocides are used to prevent clogging of bacteria.”

The final question was about the long and short- term goals of hydraulic fracking: “Gas and oil go up and down, right now gas is cheap and there is a lot of it. The main goal behind all this is for politicians to make money and to become energy independent. Which in time could make the United States the leader in Oil and Gas.”

View all posts by Stephen Shklanko →