Chants of “the people united will never be defeated” rang out over Manhattan the night of July 7th, following the killings of Alton Sterling and Philando Castille.

Over a thousand protesters started in the heat at 5 p.m. in Union Square with the text blast-rallying cry coming that morning at 11 a.m. The march went up Fifth Avenue and turned towards the West Side highway, where marchers were met by the NYPD Strategic Response Unit with batons and helmets, keeping the entrance to the Lincoln Tunnel clear for traffic.

Craig Way, a 26-year-old black male who works in Telecommunications said, at the sit-in in Times Square, “I’m here because we need to stop the war on Black America.” Mr. Way was “sickened” by what he saw on the news the morning after Mr. Sterling was recorded being shot on a cell phone camera outside a gas station in Baton Rouge, LA the day before. The video of Mr. Castille shot for a busted taillight just added fuel to the fire.

“I’m fed up that their lives were ended because someone doesn’t know how to deal with a situation,” Craig postulated.“That could have been me. Enough is enough. I had to do something. This was the only thing I knew I could do to bring justice.”

The march was organized by Black Lives Matter, a national organization formed after the death of Trayvon Martin, an African-American 17-year-old who was stalked and killed by a neighborhood watch volunteer in Florida. The group became a household name after the controversial police shooting of Michael Brown, an 18 year old black male, in Ferguson, MO, was recorded on a cell phone. The subsequent protests in Ferguson
catapulted Black Lives Matter into the spotlight.

When the march was stymied for a moment on Eleventh Avenue and 42nd Street, conflicting cries of “Black Lives Matters” matched with “no justice, no peace,” to make a street symphony.

Edna Holfield, a 22-year-old black female film student at Hunter College, said, “I’m just so tired of all of this, I had to be proactive. When I heard about Alton yesterday I was very upset, and then I saw the video [of Mr. Castille] in the library at school today and started crying.”

Men and women had taken to the streets, with most hooded and masked despite the sweltering July weather. In opposition to the police trying to corral the crowd, cries of “whose streets” were met with an equally deafening “our streets.” Shouts of “if we don’t get no justice,” were met with, “then you don’t get no peace.”

Those trapped by the protest either looked uninterested, waiting to drive again, or blared their horn in agreement and pumped their fists into the air.

“We want inspirational leadership,” Mike Jacobs, a brawny, bearded man of 30, said, wearing his TWV-100 Union Member shirt. “We want progressive leaders who will shift things… We don’t have that.” Mr. Jacobs came out in a show of solidarity, in what he termed a “class defiance” of the current state of the union.

He pointed out the number of ‘birds,’ or helicopters, circling overhead, and the size of the police force on our left side, 20 armed officers of various ethnicities. 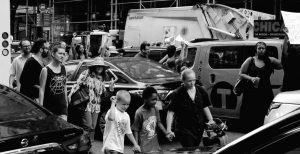 Press coverage of the rally the following day further highlighted the growing gap between the ideological left and right. Most local news organizations focused on the fatal shooting of five police officers during a rally in Dallas, TX, and made no mention of the protest march that began at Union Square.

The New York Post, a Rupert Murdoch-owned paper, claimed that there was a state of “Civil War” in America, driving a wedge between the police force and the ones they are tasked to protect and serve.

The Jacobin, a socialist newspaper whose name comes from the ruling party after the French Revolution, took it a step further and declared, “the fact is that militarized police habituated to the shoot-first, command-presence mentality… [have] long been deployed with impunity.”

In a press conference after the shooting, President Obama stated, “Whenever those of us who are concerned about failures of the criminal justice system attack police, you are doing a disservice to the cause.”

There were no gunshots at the sit-in at sunset in Times Square, but the crowd began to disperse as a panicked mob, taking off at a run, as police officers with batons and riot gear pushed into the front and started to slap zip tie handcuffs on people’s wrists.

The crowd that had, moments ago, been chanting “Tiananmen Square, Times Square, we ain’t f— moving,” began the long march across to Fifth Avenue and up into Harlem.

The sky was growing dark by then, but the furor of the protest and the grateful honks of car-laden supporters did not begin to dissipate.

Allison Holt, a 37-year-old Software Engineer that joined the march around 50th Street right after work, said, “I’m marching because we can’t pretend to live in a just society when black lives don’t matter.”

A day later, Obama continued his address to the nation, saying, “We turn on the TV or surf the internet, and we can watch positions harden and lines drawn and people retreat into their respective corners. I understand how Americans are feeling. But Dallas, I’m here to say we must reject despair. I’m here to say we are not as divided as we seem.”

Then, in a display of unity Obama and First Lady Michelle Obama, former President George W. Bush and his wife Laura, Vice President Joe Biden and his wife Jill, Dallas Mayor Mike Rawlings, Dallas Police Chief David Brown and others joined hands as a choir sang “The Battle Hymn of the Republic,” the marching song of the Union during the Civil War. 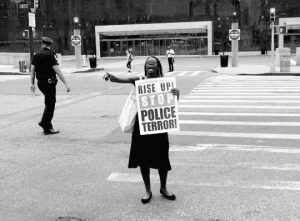