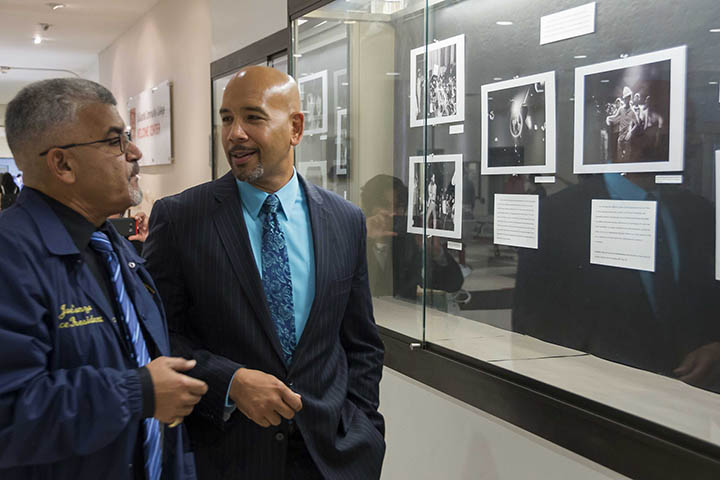 For many, it would be difficult to argue against the integral role that culture plays in their lives. On October 11th, 2017, LaGuardia Community College invited students and faculty to celebrate Latinx culture by hosting “Born in the Bronx: Hispanic Heritage Celebration.”

The event consisted mainly interviews with two men who are undoubtedly familiar with the importance of their culture. The first was Bronx Borough President Ruben Diaz, Jr., who was interviewd by Professor Victor Rosa of the English Department.

Mr. Diaz, Jr. is a graduate of LaGuardia Community College and grew up in the South Bronx. At LaGuardia he obtained a liberal arts degree, with a concentration in history before transferring to Lehman College and securing a bachelors degree in political science.

The son of State Senator Ruben Diaz, Sr., Diaz, Jr.’s hard work anddedication paid off as he followed in his father’s footsteps and became one of the youngest members of the New York StateAssembly members in 1997. In 2009, Adolfo Carrión Jr. was appointed director of the White House Office of Urban Affairs by President Barack Obama, leaving his former position of Bronx Borough President vacant. It was Diaz Jr. who was elected to replace him eight years ago, and has remained Borough President since then.

Mr. Diaz Jr. evoked pride in his South Bronx roots and culture. When asked about his earliest neighborhood memories, one could almost hear a harp as he began reminiscing about his childhood. 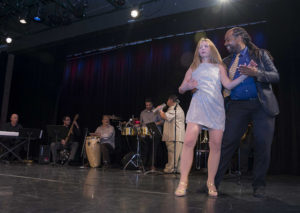 Hip-hop at that time cemented itself as a positive cultural trait for not only Mr. Diaz Jr. but for nearly everyone in the South Bronx. His passion and excitement for the Hip-Hop genre oozed as he recited lyrics from his favorite song, “Rockbox” by Run DMC. Mr. Diaz Jr. described the kind of music he listened to and how although his family had always listened to salsa and merengue, he was always more of a hip-hop fan.

He explains how tough it was growing up in the South Bronx. “It was ugly, violent, drug-infested, and war-torn,” stated Mr. Diaz Jr. He explained how the rise of hip-hop turned rival gang members into brethren, enemies into friends, and brought the community together when the government had completely neglected the Bronx in its time of need.

Mr. Diaz Jr. welcomed the dynamically positive changes to places such as Hunts Point, and said he’d like to continue to fight for them. Growing up in a dangerous environment seems to have done nothing but inspire the Bronx Borough President to continue to improve the community and build upon the culture established there many years ago.

His views on gentrification had resonated with the audience, including LaGuardia student Shantell DeJesus who said, “With him also being a minority, I expected him to be so against gentrification. Before he explained the whole other side to it, I thought he’d say something like ‘It’s something we need to fight against with them kicking our people out and bringing in all these rich people,’ but he explained himself very well.  He said all of the new buildings, restaurants, and businesses being placed in these [remodeled] neighborhoods were things we deserved, things we’ve worked hard to earn, and they should be seen that way, and not as things holding us back or damaging to our culture.” He believes there was ignorance in the belief that gentrification was detrimental to the community and culture. “I believe the Bronx can become the Silicon Valley of New York City,” said Mr. Diaz Jr.

Another gentleman acquainted with the importance of culture is Joe Conzo Sr., who spoke with Social Sciences’ Professor Jane Holzka.  Mr. Conzo, a publicist and music archivist, was very close friends with the late Tito Puente, a legendary Puerto Rican-American musician, composer and band leader who grew up in Spanish Harlem.

As soon as the interview began, Mr, Conzo, the author of Mambo Diablo: My Journey with Tito Puente, spoke about the significance of culture. He prides himself in the cultural contributions that he and Puente made. “The most important thing for each and every one of you out there is to learn about your culture. Most of you have heard the word Salsa. Salsa is tomato sauce. Salsa is not mambo, Salsa is not cha-cha-cha, not merengue. It’s a term that was created by a record company because it made it easier for Americans to pronounce Latin music because they couldn’t say maraca, cha-cha-cha, rumba… I could go on and on.” Mr. Conzo said.

Mr. Conzo also spoke about his experiences and advantages of working with Puente firsthand. “I teach a class at Hostos Community College in the Bronx every Saturday on the history of Latin music and Jazz. The advantage you have with me is that I lived it; I knew these guys. I didn’t read it in books. I lived it with these guys.” And when Professor Holzka asked, “So, can you describe the environment in East Harlem in the early 40’s and 50’s?” he responded with “Spanish Harlem was this: you had the marketplace which was the divider. West of Fifth avenue was all Blacks, East of Third Avenue was all Italians. Puerto Ricans were in the middle, and everybody knew everybody, [unlike] today.” Again, as he spoke he adopted a prideful tone even as he seemed to admit that the community was imperfect and somewhat segregated, yet still united.

Culture is, for the most part, a crucial aspect of the lives of many. One’s culture can dictate how or even if they grow as a person. The idea of the importance of culture is one that isn’t lost on either Ruben Diaz Jr. nor Joe Conzo Sr. Both of these men seem to take pride in their cultures and use them to continue to improve themselves and their communities.