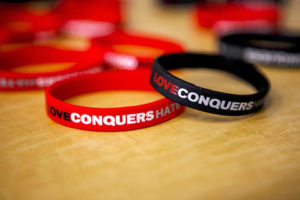 On Wednesday, October 11th, LaGuardians experienced their first National Coming Out Day event hosted at LaGuardia Community College by the Women’s Center. In celebration, students and faculty supported their peers as they listened to each other share their own coming out experiences.

“I never thought I could be straight but I knew I couldn’t be gay,” says Student Success Mentor and ASL tutor, Caitlin Dean when explaining her confusion while growing up with a mother who did not approve of gay people.

Dee Mandiyan, one of the speakers and organizers of the event, explains the meaning of “coming out” and its distinctive difference from being “outed.” “Coming out is an idiom for LGBTQIA people’s self-disclosure of their sexual orientation or of their gender identity,” says Mandiyan. Being outed, however, is “the deliberate or accidental disclosure of an LGBTQIA person’s sexual orientation or gender identity, without their consent.”

National Coming Out Day was founded by Robert Eichberg, a gay rights leader and psychologist alongside Jean O’ Leary, an openly lesbian political leader and activist in 1988. The event obtained its attraction in 1987’s March on Washington, when the LGBTQIA community rallied in Washington, D.C to signify coming out to their family, friends and colleagues, and living publicly as someone from the LGBTQIA community.

Students weren’t the only participants. Biology professor Jacqueline Alexandra Brashears says  “I teach anatomy so it was interesting to understand the male and female representation… I went to my chair first and said I was queer and I planned on transitioning within the next semester and she said, ‘How much paper work is this gonna take me?’ But she was supportive.” English professor Belkis Gonzalez explains the struggle of coming from a strict household and being a lesbian: “I was exploring parts of my life and sexuality that didn’t fit with my home life.”

According to Mandiyan of the Women’s Center, “Most of the hate crime homicides are trans women, particularly black trans women. Outing people can cause serious harm and can cause them to lose their job, their housing. Giving someone love and hope doesn’t cost you anything and can result in their peace of mind.”

In August 2013, Islan Nettles, 21, was beat to death after a man named James Dixon, 25, learned she was a transgender woman following his flirtatious comments. As reported by The New York Times, “He told detectives that he had started flirting with Ms. Nettles, unaware she was transgender, after meeting her and her two friends on the street. He said he became enraged and attacked her when his friends began mocking him for trying to pick up a transgender woman. ‘I just didn’t want to be fooled,’ he said in a videotaped statement.”

Those of the LGBTQIA community are no strangers to fear. “I was bullied from [ages] 8 to 10 and I kept thatsecret from everyone. I was never content with what I saw in the mirror. I was bullied because of how fat I was. No one cared, everyone just laughed at me. When I grew up, I learned that being gay isn’t a choice. I didn’t open up because I didn’t want to get bullied again,” says nursing major Abraham Tapia, 22.

If you or someone you may know is concerned about safety or need help through your own coming out situation, visit LaGuardia’s Women’s Center in room MB-10 or the Wellness Center in room C-249 forcounseling.