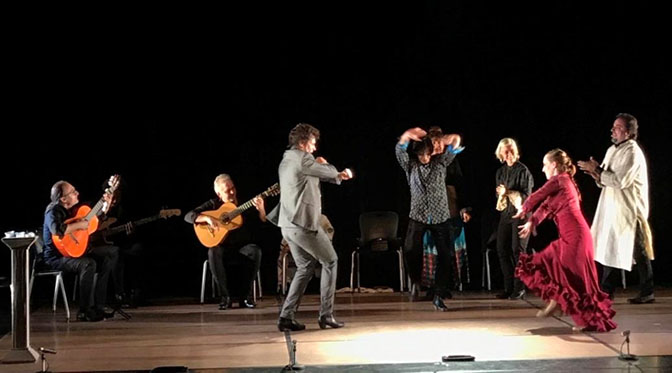 Noche Flamenca is a diverse thespian group that expresses the laborious, enthralling visual of flamenco with superb artistry.

The company was established in 1993 by creative director and choreographer, Martín Santangelo, and it highlights the dancing of his wife, Soledad Barrio.

Flamenco is a form of song and dance associated with the region of Andalucia Southern Spain. It is known for its intense, passionate expressions of theatrical emotion and its display ofthe hardships of gypsy culture. The music mixes Spanish and Arabic traditions.

The very heart and soul of flamenco revolve around dance and music which are interconnected and presented significance, forming an authentic common energy. Without using ruses or stunts, Santangelo has effectively brought to the stage the spirit, purity, and honor of one of the world’s most complex and enigmatic art forms.

Noche Flamenca’s debut was an intense piece based on Rumi’s poem “The Christian, the Muslim and the Jew”, which was translated by the acclaimed American writer and comedian Paul Sills, founder of Second City. For this piece, Noche Flamenca performed in the unison of the Jewish, Christian, and Muslim cultures that symbolize flamenco within themselves.

Santangelo was profoundly moved by Sills adaptation of Rumi’s enduring writings back  in 2000. He was then fortunately gifted the script by Sills. Today, more than a decade later, through song and dance, and now, poetry, Santangelo emphasizes a particular piece of Sills’ script that discovers the relationship between there spiritual leaders—one  Christian, one Muslim, and one Jewish , each pursuing to find the most effective means to connect openly with God.

The artistic work introduces Andalusian songs, where all three spiritual backgrounds co-existed in relative harmony in Spain from the 9th to the 15th centuries, were the seeds of the Renaissance started. What inspired the expressions of this passionate dance were the memories from a past era of prejudice, tyranny and exclusion in Spain .

A wild energy dominates the stage: performers of diverse ethnicities  swirl skirts, clap and stomp loudly encouraging themselves and others in loud interjections, all  choreographed to follow the upbeat flamenco guitars.

The group performs with  unrestrained, tense expressions of dramatic emotion accompanied by flamenco guitars, handclaps, and passionate tap dancing. The performance features Juan Ogalla as the Christian, Carlos Menchas as the Muslim, Marina Elana as the Jew, Emilio Florido as the vocalist, Eugenio Iglesias and Salva María as dancers and Phoeba Mar as the narrator.

“I really liked it. It’s my first flamenco show.  I like how the three dancers showed different styles of dancing. The Jew’s dance was more alluring while the Christian expressed aggressiveness, and the Muslim performance was emotional. It was amazing!”, said Tatiana, a LaGuardia 2013 alumna.