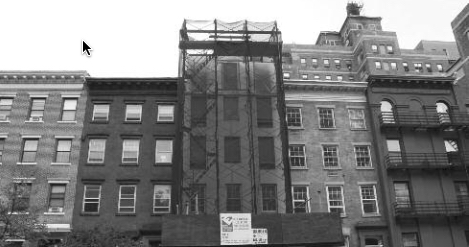 After a public hearing on September 20th, local residents and supporters may be one step closer to preserving the last remaining stop on the Underground Railroad in Manhattan, after the City’s Landmarks Preservation Commission (LPC) requested the removal of an alteration that has sparked controversy.

Located at 339 West 29th Street, the Hopper- Gibbons house has been the subject of an ongoing battle over the addition of a fifth story penthouse.

Although the property was deemed a New York City landmark by the LPC, the owner of the property, Mr. Tony Mamounas, still had the penthouse installed thanks to a permit from the Department of Buildings that was given mistakenly.

Supporters, ranging from college professors to government officials, arranged a press conference prior to the
hearing in order to rally passing citizens and garner additional interest.

Just minutes from City Hall in a cramped sidewalk that
irritated a few traveling New Yorkers, Ms. Fern Luskin, a
professor of Architectural History at LaGuardia Community College, spoke at a press conference “to demand that [Mr. Mamounas] remove it immediately and face civil penalties.”

Others took a more social and emotional approach, such as Patrick Waldo, representing NYC Shut It Down and the Historic Preservation at the Pratt Institute, “Black community matters, black lives matter and black history matters.”

New York City Public Advocate Letitia James also chimed in, “We have a responsibility to maintain and preserve these types of historic landmarks. We’re here today to protect American history so that all individuals can know what happened at that building.”

The house gets its namesake from Abigail Hopper-Gibbons, one of the many influential abolitionists of the 1800s, specifically during the Civil War.

Though she may not have had the impact of a Frederick Douglass or William Lloyd Garrison, her home was a stop on the Underground Railroad and allowed many runaway slaves a passage of escape.

She, along with her husband James Hopper- Gibbons, were targeted during the 1863 Draft Riots, which were a result of the legislation that allowed the federal government to draft citizens into the national military.

Any alteration to the house would not be tolerated by preservationists, but the rooftop is off-limits in particular. Slaves that the Hopper- Gibbons family were harboring used it as an escape route to freedom.

Professor Luskin, a member of Friends of the Hopper-Gibbons House, has tirelessly worked on this issue for over nine years. She sent letters seeking assistance to the commissioner of the Department of Buildings, the LPC and elected officials.

She has been critical of the lack of attention and action towards the alteration. “It should be the city that oversees all this and protects it. Here [in New York City], the developers rule. They’re the kings. In other cities you have to get permission to plant a tree. Who knows how many other buildings that haven’t been discovered and they’re being destroyed,” Ms. Luskin said in a rally back in June.
When asked about the issue, students of LaGuardia had much to say.

One student, who preferred to remain anonymous, believed that people should not be glued to the past, “Whatever happened, happened. We should just move forward.”

Other LaGuardia students were concerned but were open to compromise.

Roma Choudury, a 25-year-old psychology major, said, “I do not agree with adding the penthouse to it. Why not do something in honor of them? It could be a historical penthouse.”

Professor Luskin started an online petition that has gained 549 signatures as of this publication. She has called upon students to join her fight for historical preservation, though some may side with freedom of property ownership.

The ongoing work to continue preserving the Hopper-Gibbons house in its original form doesn’t look like it will be coming to an end anytime soon.