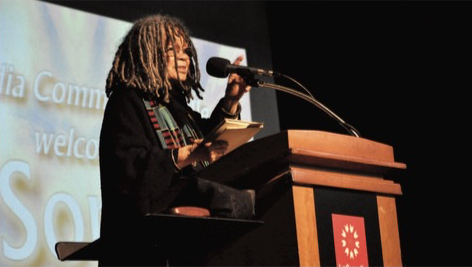 Haunting chants of “peace” echoed the halls outside the Little Theater on Tuesday March 10, 2015, as renowned poet and activist, Dr. Sonia Sanchez, graced the stage with a lecture and a reading of a selection of her poetry for the African Heritage Month’s Resistance to Oppression series at La Guardia Community College.

Co-sponsored by Campus Life and the English Department’s Black Literature, Art, and Culture Committee (BLACC), Dr. Sanchez was invited to speak in honor of Black History Month. During her lecture, she called on students to learn from their ancestors and to become the leaders of tomorrow through social activism.

“You, young people, have got to begin to say, let’s have a generation where we can build up this country.”

Standing at about five-feet-tall (or less), her confident stance, silver dreadlocks, and provocative poetry proved to the crowd that her wisdom and work as a Civil Rights activist still continues. At 80 years old, Dr. Sanchez is known to be a seminal figure in the Black Arts Movement of the 1960s.

Growing up in Harlem, Dr. Sanchez received a degree in political science from Hunter College in 1955. She later became involved with the Civil Rights Movement and then joined the Congress of Racial Equality (CORE). She met both Martin Luther King, Jr. and Malcolm X however it was Malcolm that was the most influential in her writings. Her first two collections, Homecoming (1969) and We a BaddDDD People (1970) reflect her radicalism and affiliation with the Black Arts Movement. Sanchez was one of the forefront figures of the Black Studies movement and taught the first course in the country on Black Women. She is a Professor Emerita of English at Temple University.

Throughout the lecture, Dr. Sanchez incorporated her works of poetry to discuss topics such as human rights, racial justice, and black radicalism. One of the poems she read was entitled “Poem for Some Women,” a piece famously performed on Russell Simmons’ Def Poetry Jam on HBO. She reflected on her time on the program and on how this particular poem brought tears to Simmons’ eyes. Inspired by a news story about a mother and her child’s visit to a crack house, the poem captures the effect of the crack epidemic that hit Harlem in the 1980s. Dr. Sanchez emphasizes that it is important to write these stories, even if they are hard to write, to give a voice to the oppressed. She emphasized that people don’t live easy lives. It is important to show the rest of the world these tribulations in order to come to an understanding of how to fix these real world problems.

“You have to understand, there is a war going on against you, young men of color. Don’t let anyone stop you from realizing who you are.”

The Little Theater was packed to capacity (220) with students, faculty, staff, and members of the general public, listening to Dr. Sanchez’s spell- binding lecture. She integrated current events, social commentaries, history, her own life experiences , and her writings as a poet to inspire students to become educated leaders of the future.

Mr. Anduha explained that the painting was inspired by his reading of her powerful words.

A Q&A was held between Dr. Sanchez and the students, faculty, and staff, after the lecture. As a token of appreciation from LaGuardia’s Student Life Committee, Anthony Anduha, a student, presented Dr. Sanchez with a special painting.

“The whole point of this piece is unity through population, through everybody. At the end of the day, we are all that we got. What we should have known ions ago is that unity is important in order to progress forward.”