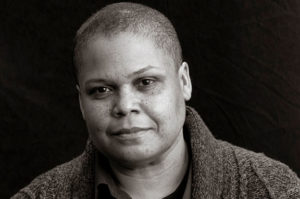 On Tuesday, May 29th, the Robert Fitch Memorial Lecture Series invited Dr. Keeanga-Yamahtta Taylor, a Princeton University Assistant Professor of African-American Studies, to deliver a lecture culled from research for her upcoming book on the subject of the discriminatory practices that have haunted Black attempts at homeownership.

The lecture, entitled “Race for Profit: Black Homeownership and the End of the Urban Crisis,” was held in the Little Theater, and nearly filled its 199 seats. Professors, staff members, students from LaGuardia, those from the wider CUNY community, and New York City residents alike crowded in to hear Dr. Taylor speak.

Dr. Taylor’s rise to prominence as a leading voice in the black academic community came on the heels of a series of tragedies. In 2013 and 2014, the acquittal of George Zimmerman for the fatal shooting of Trayvon Martin and the killings of Michael Brown in Ferguson, Missouri and Eric Garner in New York City by police were the final straws that ignited protests around the recurring issue of police harassment and the killing of unarmed black people with impunity.

What started as a hashtag and a local outpouring of anger grew and evolved into the #BlackLivesMatter movement, a powerful nationwide organization known for its large street protests that has effectively made this issue a prominent part of the zeitgeist.

In 2016, Dr. Taylor published her firestorm book “From #BlackLivesMatter to Black Liberation,” which made her one of the leading academic voices in solidarity with the movement, mapping how this phase of the black struggle began, providing it with a detailed historical perspective, and helping to guide the people involved with this fight into the future.

Dr. Taylor’s forthcoming work, which will be titled Race for Profit: Black Housing and the Urban Crisis of the 1970s, is more singularly and deeply focused on the historical analysis that is a feature of From #BlackLivesMatter to Black Liberation, as evidenced by the summary she presented.

The lecture was a departure from her activist past, in that she was not on stage calling for direct action from those of us in the audience. Rather, she was outlining, in stunningly intricate detail, the history of a single form of discrimination, one whose patterns can still be recognized in our contemporary world, and the lessons that she believes must be taken from this history if these patterns are to stop repeating.

Dr. Taylor began her examination of the troubled history of black homeownership with 1968, when an outbreak of riots in a number of cities frightened lawmakers into passing the Fair Housing Act (FHA) and the Housing and Urban Development (HUD) Act, a pair of laws intended as correctives to the overtly discriminatory policies of redlining and racial covenants in suburbs. These policies made it impossible for black people to obtain both a home and the new American Dream connected to owning one that had risen out of the New Deal and the GI Bill, while trapping them in cities starved of social services.

According to Dr. Taylor, however, these new laws, while making black homeownership possible, also inducted the new purchasers into a nightmare world of property speculators and mortgage brokers who lured them into buying homes they could not afford which were also uninhabitable – facts that remained well hidden until the victims had signed the sales contracts and it was too late.

She illustrated her point using the story of a woman named Janice Johnson. Ms. Johnson was a single black mother on welfare living in Philadelphia and raising her 8-year-old son. Their apartment building had just been condemned, so she and the young boy were facing eviction. Looking for another apartment to rent, Ms. Johnson was turned down because she was a welfare recipient. However, the landlord told her that rather than rent she could buy a house from him.

She could take advantage of a new HUD program designed to make it possible for low-income people to buy homes with a small down payment, a low interest rate, and an insured mortgage backed by the FHA. The landlord-turned-realtor promised that because her new house had been approved by the FHA, she would be getting a “good house.”

Only days after she moved in, the sewer line broke in the basement. The house proved to have faulty electricity and rotten floorboards. But the worst was yet to come. On Halloween night, Ms. Johnson’s son, Edward, awoke with a rat in his bed. The holes in the basement revealed themselves to be filled with rats’ nests. Ms. Johnson called the landlord, but he told her that the house’s problems were her own, that they were “homeowner’s business.”

The most striking argument Dr. Taylor made was that “There was a basic conflict of interest at the heart of these [public-private] partnerships.” Simply put, “the public sector is intended to protect the public’s welfare. Private enterprise exists to turn profits and make money.”

She quoted a HUD administrator as saying, “the lender will not participate unless the programs provide an opportunity for a profit which is acceptable to the lender. If we were to make the mortgagee responsible for increased preservation activities, we might be imposing a burden which would make continued participation uneconomic for the lender. There is a delicate balance between the needs of HUD for more stringent procedures and the willingness of the mortgage lender to continue his participation in our program.”

It was at this point that Dr. Taylor’s argument hit home: “And this was the crux of the problem. Housing the low-income and poor is uneconomic – meaning, there is little if any money to be made. If the federal government was going to defer this responsibility to what [former President] Lyndon Johnson referred to as ‘the genius of private industry,’ then they would have to make it profitable for the private sector to be involved. This was not a conspiracy; it’s simply a function of capitalism. The purpose of capital is to reproduce itself, and profit is the result. But it is difficult to convert programs and policies intended to protect and enhance the welfare of poor and low-income people into profit-making ventures.”

Dressed simply in a light blue button-down shirt, rectangular glasses, and short-cropped hair, Dr. Taylor displayed a no-nonsense manner as she delivered her lecture in a dry, dispassionate tone. She neither rose to heights of disgust and disbelief that the material could have produced, nor sank to tragic lows of despondence that the current situation could impart. Her subject gave her no visible sense of unease, which a less hardy constitution might have been tempted to compensate for by inserting a superfluous joke or trying to make light of a gravely serious subject matter. Ultimately she gave the impression of a woman unafraid to speak the truth, whatever the popularity of what she had to say.

The reception that followed the lecture was a gathering in the Social Science Department on the fourth floor of the C-building, adorned by a table of wine, cookies, and fruit, tightly packed with admirers waiting nervously for their moment with the famous guest of honor to fumble out their best question, rehearsed the night before, while handing her a pen and their collection of her books to sign.

Dr. Taylor herself was but briefly able to attend, protesting that she had a two-year-old awaiting her attentions at home, but I found my way up there and squeezed in and out before it became what it was destined to be, an incestuous collection of faculty, CUNY grad students from far and wide, and community members brought together by their love for the speaker and urban housing policy and eager to stay late arguing the minute details of Dr. Taylor’s books.

Having recently moved, my copy of her book remained at home packed in an unmarked box. But I was able to ask her my question: “I was waiting for a call to action. Why wasn’t there a ‘This is how you can make a change’ in your speech?” She answered by reminding me that she had been invited to the college for an academic lecture. “If you’re looking for a call to activism, read From #BlackLivesMatter.”

Like many in the audience, I had already read From #BlackLivesMatter to Black Liberation, and though her lecture was brilliant, it left me wishing I had seen her on a tour of her previous work, so that I could have heard from the source that it’s up to each of us, whether through direct action in the form of marches or rallies, or through our vote and the pressure we place on our legislators, to put an end to these egregious violations of human rights.

About Rachel Berman with Sebastian Tuinder

View all posts by Rachel Berman with Sebastian Tuinder →