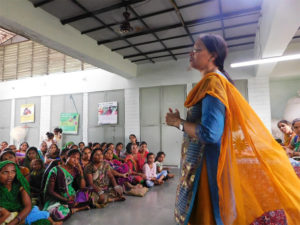 How does a personalized, performance-based approach to preventative health make all the difference for slum communities in Ahmedabad?  One NGO answers by leaving its mark.

AHMEDABAD, India–A dozen women clad in pink-and-royal blue saris sway across their makeshift stage before converging in a circle to sing. Sweat drops glisten on the nape of some of the women’s necks; theyhave just finished a dynamic dance-drama performance in the hall. Their set design is a backdrop of a clothed table, six seats occupied by other women, and cows and donkeys prying from behind closet-sized open windows. Their vocals use melodies from common folklore songs to introduce health topics from the keynote speech that follows.

The performers are health workers from Manav Sadhna, the predominant non-governmental organization (NGO) providing direct services and community development to the city’s largest slums. They are addressing a crowd of approximately 100 female rag-pickers, most of whom are clutching their young, at the Breastfeeding Clinic hosted at the women’s community center.

For organizations like Manav Sadhna, performance plays into a wider scope than theatre programming; it is embedded in the organizational culture. Slum residents’ needs are addressed when staff co-performs culture alongside them in initiatives like the Saturday Afternoon Special, which was Manav Sadhna’s first project directly servicing the community. Mahesh Rathod, 33, who belongs to the first generation of participants as a young boy from the nearest slum, recalled the intimacy of being given a thorough bath and having his nails cut during the Saturday Special. Such connection-based rituals have historically been one of the key ways of building bonds between the staff and children in Manav Sadhna, said Desai.

The nonprofit operates under a holistic approach weaved by intuition, according to Volunteer Coordinator Anjali Desai: “You know when you’re working with children what you see they need helpwith.” Such instinctive evaluations of needs include seeing lice in the children’s hair, noticing if their fingernails are unkempt, or checking for signs of undernourishment.

Children generally first come into the Manav Sadhna space with a lack of health awareness and with a regular diet of fryums, or street food popular among parents for its cheapness. In a place where a banana costs as much as a pair of fryums, parents and their kids tend to choose the latter for its deep-fried taste. When youth become principal actors in flipping the script and buy into an alternative nutritional model, the effects are wide-reaching, according to Desai.

“Children are treated as key community members in the program, but you need to get the whole community involved in order for it to work,” she said. As agents in learning novel health habits, youth take leadership into their homes, influencing families to change nutrition and other daily habits: “Once children are committed, you have a lot of role reversals, where you have kids teaching parents what they’ve learned.” 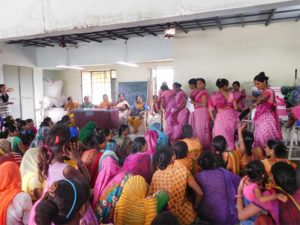 The weekly program incorporates musical activities like the use of liquor bottles as percussion instruments for children learning basic health and hygiene awareness. Prem No Parivar’s theatrical productions, which touch on holistic health themes while portraying the real-life struggles of slum life, are a large part of value-based wellness learning, according to Desai: “It connects them to tradition but also brings in the joy of learning…Every step of the way, there’s been a lot of learning, so we can focus on prevention.”

Manav Sadhna staff determine areas of prevention focus, apart from visual or auditory assessments of needs at the centers and during home visits, based on seasonal prevalence of communicable diseases. For instance, during the monsoon period, Manav Sadhna coordinates frequent malaria prevention clinics and awareness camps, and incorporates a malaria awareness component to daily health workers’ slum walkthroughs and resident interviews.

Such prevention efforts regularly take the shape of performing arts to attract adult audiences. Once locals are gathered at the community centers, singing and drama promote women’s health topics like proper hydration, hospital registration, swine flu prevention, and breastfeeding techniques. Such talks are culturally adapted to this population, according to Dr. Belaben Patel, 56, who has specialized in women’s health since 1988 as a government employee and regularly partners with Manav Sadhna. For instance, as these women generally work home, in contrast to Gujarati women commuting to offices, the recommended breastfeeding frequency is as much as 10-12 times daily, while there is no need to promote breast milk preservation.

Attendance at these health promotion events is reinforced not only through marketing but also physically. After two spokespeople made speeches and an audience member verbally sparred with Deputy Mayor Subiya Shashikantbhai, 55, over the lack of access to clean water, one young woman stood up to leave with a child. Health workers intercepted her at the door and asked her to return to her seat. While the young woman conceded, she later tried again more forcefully, and was pushed back by the health workers. The young woman and several others resembled a literally captive audience as they resisted the shoves and propelled themselves past the guarded doors.