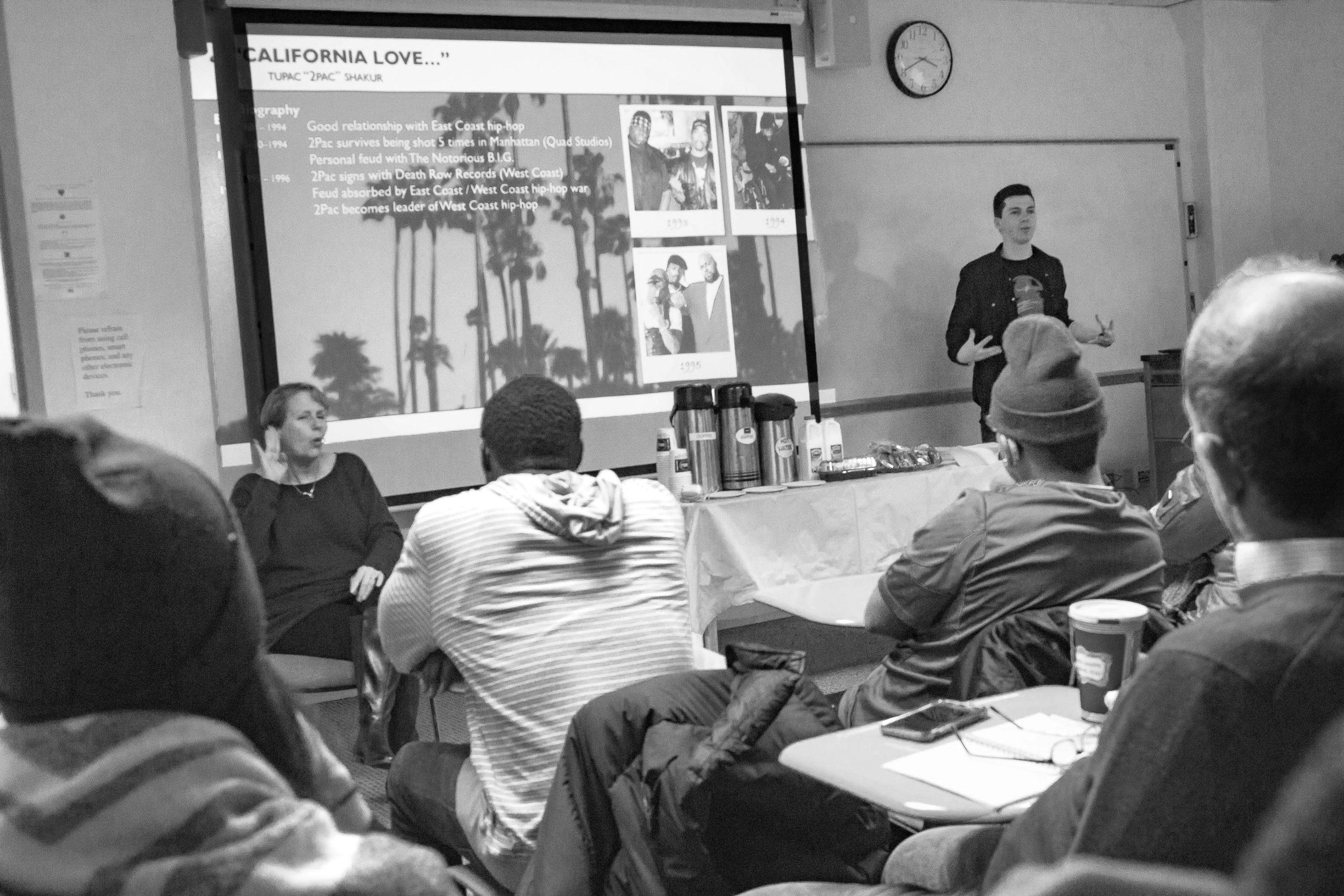 In a classroom filled with students and professors, Mr. Gilbers proceeds to break down hip-hop culture and the importance of authenticity in the hip-hop community. “Another crucial part of hip-hop culture is this idea of keeping it real… It is difficult for a rapper to represent a region they are not from,” says Mr. Gilbers. To demonstrate this point, he shows a clip from his favorite film, 8 Mile, in which the character Jimmy “B Rabbit”, played by Eminem, freestyle raps and proclaims he currently cannot represent Detroit as he has moved outside the 313-area code. An example such as this gives a glimpse into a culture that has spread across the globe and has taken on many forms.

Mr. Gilbers uses hip-hop to study the subtle linguistic differences, such as vowel duration, of African-Americans from the East Coast and West Coast. “For a long time, sociolinguists, by that I mean old white men, didn’t realize African-Americans actually sounded different in different parts of the country,” says Mr. Gilbers. One example Mr. Gilbers provides is an audio recording of West Coast rapper Ice Cube and East Coast rapper Jay-Z pronouncing the word ‘man’ in which a clear difference in vowel duration is observable between the two. Gilbers uses many other artists to make the comparison but a unique case in this discussion is Tupac Shakur.

Tupac Shakur was born and raised in Harlem and moved to Baltimore in his teens before settling in California with his family at the age of 17. Shakur is regarded as a West Coast rapper despite being an East Coast native. He serves as a unique example of someone who was not a West Coast native but became accepted amongst the hip-hop community on the West Coast. Shakur’s pattern of speaking also began to change the longer he stayed in California.

For linguists, African-American English is not just a dialect of standard-English but can be considered its own language. The term can also be referred to as “Ebonics,” a play on the words ebony, or ’black’, and phonics, ‘sounds.’ It was dubbed “Ebonics” by African-American scholars who were combating the term Non-Standard Negro English, which was coined in the 1960s when linguistic studies of African-American speech began. Mr. Gilbers uses hip-hop as a medium for his studies, particularly East Coast and West Coast hip-hop.

Originally from the Netherlands, Mr. Gilbers took an interest in hip-hop at the age of eight. It was at that time that his parents bought him one of Eminem’s albums. Using hip-hop as a tool for his studies as a linguist, Mr. Gilbers enjoys his work since, at the end of the day, he listens to his favorite genre of music. As a hip-hop aficionado, Mr. Gilbers has an appreciation for emcees, as he feels that they take the craft of writing more seriously and have more of an understanding of the history of rap and hip-hop.

Mr. Gilbers’ scholarship has only covered East and West Coast rappers so far, but he hopes to take his research and compare it to other regions such as the South, where many prominent rappers have emerged over the past few years.

View all posts by Anthony Tellez →