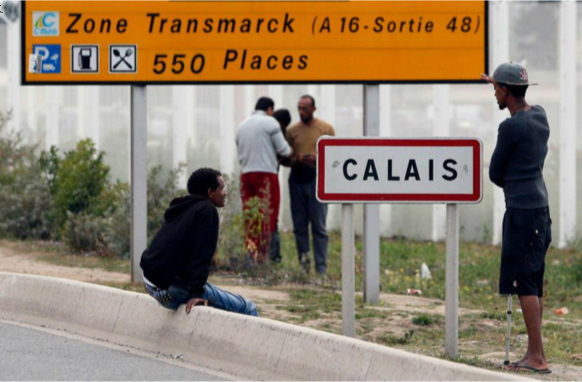 Calais, FRANCE – It’s a long walk from the supermarket to the Jungle, Calais’ refugee camp. Along the road men sit in the sun, and recline on old railroad tracks, creating an easy marker to let you know you are heading in the right direction.

In the camp, it’s different. The tents are jammed together, hemmed in by barbed wire protecting a chemical plant, and police protecting the highway nearby. Refugees from the camp climb into the backs of trucks entering the highway to get out of the Jungle and into England. Because of the restrictive immigration laws in the EU, this is most people’s only option, and one of the safest legs of a long and harrowing journey.

For Mohammad Siddiq, a 30-year-old Sudanese man who has been in the camp for six months, the trip to the United Kingdom means the promise of a future. “I want to be a lawyer,” Mr. Siddiq explained in an interview outside of the Oromia School, pressed between massive tents, with a puddle of standing water outside, a token of last night’s showers. “First I will be an engine mechanic like I was in Sudan, but I want to finish studying law. After secondary school I was in Law School. I love to work with my hands and to read.”

The Jungle has no source of clean running water, and no irrigation system to clear the raw sewage

and rainwater that forms in pools and sits for days, exposing the inhabitants to all sorts of bacteria and diseases. Despite the poor conditions, the camp is littered with positive graffiti and empowering slogans.

Mr. Siddiq’s friend, Suleman Yhayi, a 43-year-old Sudanese man who has spent two months in the camp is planning on following the same path. Mr. Yhayi has just started his English classes, so Mr. Siddiq aided our conversation by translating. “First I want to learn English, then I want to learn Arabic,” Mr. Yhayi said. “I want to work in international law, with Human Rights. School in the UK is similar to Sudan. All I need to do is finish my degree.”

Both went on the perilous journey facing many North African refugees. Their trip started with a multi-day hike from Sudan to Libya, and then a three-day boat ride from Libya to the coast of Sicily, where they were treated as aliens, some facing prison time.

Mr. Siddiq and Mr. Yhayi’s friend, who declined to give his name, said: “Europe is a problem. Anyone who comes to Europe and is caught by police is put in prison and not given food. I spent 15 days in Italy without food. We crossed the ocean to come here and live a better life, but it is no life. When you go back to Africa the

government will kill you. There is no life here, no freedom.”

Nuri Abraham, an 18- year-old Ethiopian man who has been forced back into the camp for eight months after being caught in the U.K. said: “When they find you they take your fingerprints first, then you are deported by force. They broke into my home after two months in London, then took me to the immigration and detention center. I want to be a driver and study law. The people who help us here are mostly French or from the UK. They bring us food and some clothes. There are no Americans.”

Mr. Abraham had to leave Ethiopia for political reasons. He is Oromo, which is the largest ethnic group in Ethiopia, but not a part of the ruling body, so he faces persecution back home. Like the Sudanese, if an Ethiopian returns home after becoming a refugee they face certain death.

He described his journey to Calais to me, saying: “I had to first walk to Sudan, and then to Libya. That took three months. I then had to get on a boat with 93 other people, including little children, and take an eight-hour journey, landing us in Sicily. We were then taken by bus to Mycenae, and then to Rome. In Rome I hid underneath a train car to come to Calais.”

Since Mr. Abraham is undocumented and unlikely to get chosen for asylum, he has no idea how long he will be forced to stay in Calais. He says that if he gets another chance to go to England he will, as he made it there the first time as a stowaway.

The truck drivers, like the one that unwittingly shuttled Mr. Abraham from port to port, are fed up with the situation and took it upon themselves to strike, in hopes of progressing the shutdown of the camps.

Mr. Abraham spends his time going to school and playing soccer. He is taking language classes and studying human rights law. His friend, Mohammad Ardas, a 17-year-old Ethiopian man, approached us as we were talking. He waited patiently, and then put in his two cents: “There is no chance here, it is very bad. Some people have been here one year, some three months, some five years. There is no hope, there is no chance here.

Mr. Ardas has been here one month, after a journey that took close to a year. His body is covered with scars from the journey. “I went from Ethiopia to Sudan by foot, and then Sudan to Libya by car. I had to stay in Libya for a long time, then I got on a boat with 137 other young men. It was very dangerous on my life; I cannot try another time. We were out at sea for about three days, then we landed in Sicily. They took us to the mainland, and then eventually I took a bus to Milan, then from Milan to Dominia, and finished my journey in Nice. But the police caught me, and took me back to Italy. I went on foot to Marseille, and then onto Paris. I had to spend many days with no food and no water and no place to stay. A young boy helped me take a train from Paris to here. [All the refugees] are in the camp and no one knows where they are going.”

Dispersed throughout the camps, you can see aid workers from the Red Cross, The School Bus Project, local food initiatives and even street performers putting on a show for the residents. They carry a sense of hope with them, that people are out there who care and are ready to do something. The smell of fried rice wafts from the food huts, and solidarity is strong among those caught up in the turmoil.

Everyone seemed to be asking the same question: Where are the Americans? Why aren’t they helping?

Forrest Crellin is a LaGuardia graduate and former editor-in-chief of the Bridge Student Newspaper. He is currently living and working in France.