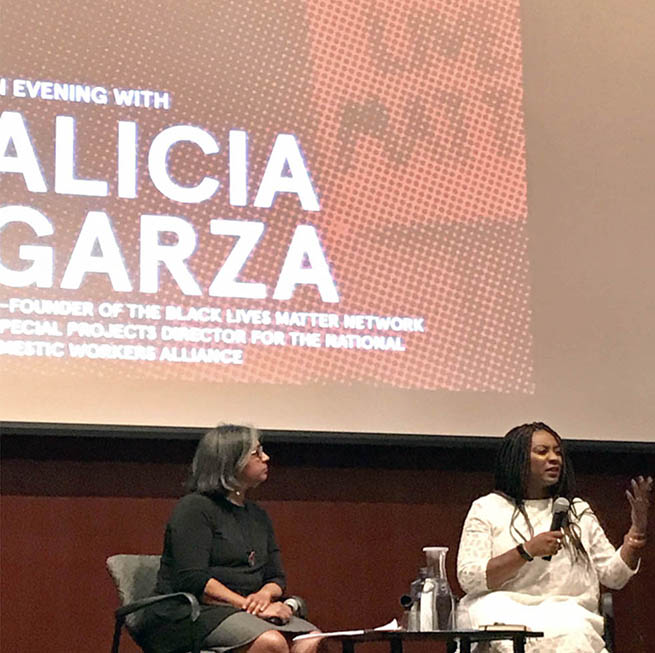 Unapologetically Black, queer, activist and feminist—Alicia Garza, co-founder of the Black Lives Matter (BLM) movement, and special projects director for National Domestic Workers Alliance, fired up the stage of Diana Center Event Oval hosted by Barnard Center for Research on Women (BCRW) last April 11th, with a crowd of more than 400, who were electrified to hear Ms. Garza’s lecture.

Premilla Nadasen, writer and distinguished Professor of History at Barnard College, introduced Ms. Garza. Professor Nadasen also moderated the question-and-answer session with Ms. Garza. In the lecture, Ms. Garza reassessed the current political condition in the country, talked about the security of Black Lives Matter and stressed the significance of solidarity.

Ms. Garza started her talk by acknowledging everyone who supported her movement since the beginning. She told the audience how it was such a beautiful time to be alive in America today, yet admitted that it was also a frightening time. She said she was worried about the current state of her movement which was at stake under the present presidential administration.

With such frankness, Ms. Garza recalled how the newly appointed officials in the government dismantled the office, how there is a continuous risk in health care, how militarism is being misused, and how there is the intended restriction of freedoms of speech by statehouses legislation—like the bathroom bill that is being legislated, which determines access to public facilities – specifically restrooms – by transgender individuals. She said, “It’s a smokescreen from the rights that has never been extended to transfer people, to gender nonconforming people.” Ms. Garza thought that behind the new bill, there’s the “deep desire to control how gender functions.”

In Ms. Garza’s conversation with Professor Nadasen, much of the talk was about solidarity—what it means in Black Lives and how important it is for everyone to understand it more deeply. “‘Black lives matter’ does not mean that nobody else’s life matters,” she said.

“Yes, black lives matter but we should be clear, solidarity is a verb. It is not an adjective that we use to describe how we pick and choose who we’re down for under what circumstances. The point is not to play Oppression Olympics,” Ms. Garza said.

Ms. Garza reminded attendees: “The focus on Black Lives is the focus on anti-blackness as we understand it, is the fulcrum around which white supremacy operates.” She said that Black people have been fighting for human rights for a long time. “We’ve gotten really deep into the cultural celebration of blackness without rooting ourselves in the material experience of blackness,” she added. She then shared that she and her co-founders modified the approach of their movement by creating new ways of reaching out to communities. She referred to Twitter as being the increasing platform of awareness, but stressed that social media is not the answer to solidarity.

“Social media is a way for people to be for a movement, but it is not the catalyst of it… A movement cannot be a bunch of single instruments playing their own songs. It will not create an orchestra—there will be a lot of noise, and it might be beautiful, but it will not become a song,” Ms. Garza said.

“I believe that if social media can make a movement, I think we’re going to get a little lazy. Social media can’t start movements. People do. It’s about acknowledging the humanity that lives inside of all of us – not hiding in front of a screen in a world that goes beyond itself.”

UPDATE: Alicia Garza was named a recipient of the 2017 Sydney Peace Prize. The prize, which has been awarded since 1998, is Australia’s international peace prize.