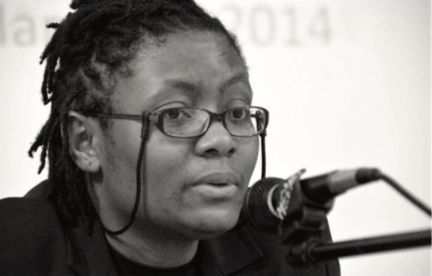 When bad things happen in our lives some of us want to crawl under a rock and give up on everything, but not Dr. Sybille Ngo Nyeck. Dr. Nyeck came to New York in May 2013 from Cameroon as an asylum seeker. When LaGuardia gave her the opportunity to get an education she welcomed it. Since then, she has accomplished a lot in her life, and it all started at LaGuardia Community College.

What is so incredible about Dr. Nyeck is her drive to want to learn and better herself. She graduated from LaGuardia in just twelve months with honors. She completed the Exploring Transfer program at Vassar College and the inter-collegiate summer science program at Barnard College all in one year. In 2005, she transferred to Swarthmore College. Dr. Nyeck was the first community college transfer student that Swarthmore accepted. In 2007, she obtained two BA degrees with high honors. She then began and pursued a PhD in Political Science at UCLA, and she graduated in June 2013. After graduation, she secured a tenure-track position at Clarkson University. She has just published her first book, Sexual Diversity in Africa: Politics, Theory, and Citizenship. Dr. Nyeck pursues two separate research interests: government contracting and contentious politics with respect “to issues that testify to the complex nature of sexuality, sexual practices, and gender performance in Africa,” says the book’s publisher (McGill Queen University Press).

On March 19, 2014 Dr. Nyeck visited LaGuardia to promote her book and to talk about her life. She spoke of her hardship and how she kept moving forward grasping at every possible opportunity. She found that being back at LaGuardia was very emotional and said, “Coming back is like coming back home.”

Many can relate to Dr. Nyeck as an asylum seeker or just a regular student at LaGuardia. She illustrates that with a little hard work one can go very far in life. Dr. Nyeck is the epitome of courage and perseverance. When she first came to New York, she did not know an ounce of English, so her writing was not up to par. In fact, she thanked LaGuardia for teaching her the craft of writing.

Many students do not always do so well in a class; however, for Dr. Nyeck not doing well in a class was not an option. She believed that if she gave one hundred percent to her education and strove to be the best at what she was doing, then there was no reason or room to do badly. When she started attending Swarthmore College she felt a burden to do well in school. She was convinced that she could not fail. She wanted to show the world that small schools are just as good as big and prestigious schools, which is exactly what she did. Dr. Nyeck shared, “You need to make the right choices for you. You need to identify what you need, staying true to yourself, but also exploring and expanding over time. Education is learning about yourself.”

Being so far away from home was very hard for Dr. Nyeck, but this didn’t stop her from getting an education. After LaGuardia, she finally felt like she had a say in where she was going, and for the first time in her life, she had choices. When asked if she missed Cameroon she said, “It is where I grew up, I don’t feel I belong to a particular place, but I do have good memories there.” Even though she didn’t have a home of her own she did have one thing, resilience. Dr. Nyeck feels very lucky because she met the right people at the right time, she said, “It is safe to say yes, but to say yes trusting the other person isn’t there to hurt you. Trust is important.”

Many people are not necessarily willing to help those who are not family. Dr. Gail O. Mellow, the president of LaGuardia Community College, told the story of the time she first met Dr. Nyeck’s mother. She said that her mother was shocked at the generosity of the people who had helped her daughter. She said that in her home you help a family member, but you would never help a stranger. The fact that LaGuardia and those who helped saw the great potential in Nyeck though she was not family was astounding to her. Nyeck is a human being who needed help to fly and to be sent on the path of success; the help she has received is something very beautiful and shows that some people are willing to help.

Dr. Nyeck is an inspiration. Laverne Summers, a student at LaGuardia, who wants to study law, is struggling with some personal problems that for many would put a stop their attempt to get an education. Summers does not want to stop and said, “I am determined to succeed.” She pointed out that she finds Dr. Nyeck very inspirational.

Nyeck said, “President Mellow was very instrumental in giving me hope and getting me started at LaGuardia. Many professors have inspired, nurtured, and given me the skills and courage to become the intellectual I am today. LaGuardia made me.”

View all posts by Solansh Moya →