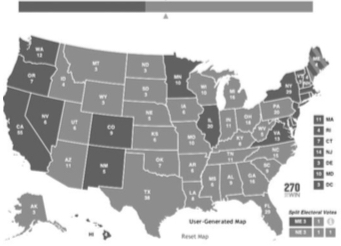 On November 8th, students of LaGuardia headed to voting booths with mixed emotions; on November 9th, students went to their classes with strong opinions.

Mrs. Clinton won the popular vote but lost the election, only the fourth time that has ever happened in the history of United States presidential elections. The previous occurrence was in the 2000 Presidential Election between Republican nominee George W. Bush and Democratic nominee Al Gore.

Rounded to the nearest tenth, she won the vote with 60.9 million against Mr. Trump’s 60.3 million, resulting in a difference of six hundred thousand votes.

In comparison, Mr. Gore won the popular vote by over five hundred thousand but lost by just five electoral votes.

Many LaGuardia students are disheartened by the result of the election. Some are plainly refusing to accept it.
Natalie Cavero, a 19-year-old studying Liberal Arts, was disappointed by the result but unsurprised. “I wasn’t shocked. I don’t think America was ready for [Mrs. Clinton] to be President.”

When asked about the electoral system, she said that “it needs to be changed.”

Other students, such as Ms. Kim, an international student studying accounting, believes the electoral college system to be “fair” and supports Mr. Trump. “America needs some turning point to prosper,” she said.

Adamant supporters of Mrs. Clinton were also passing through the E-Atrium. “If this was a regular job in a company, she would have gotten the job. She deserved the job. [Mr. Trump] is a bully. He is giving permission for people to go and do hate crimes,” said Katherine Jimenez, 23.

Jimenez, a non-degree student at LaGuardia, also expressed her disdain for the system in place and leaned towards making a change. “The popular vote means that our vote counts.”

For students living in a state that Mrs. Clinton won overwhelmingly, it is easy for some to criticize the current American voting system or advocate for its complete removal or alteration, which would not be an unfair or unoriginal opinion. {this doesn’t sound right. The wording is a bit confusing.}

A larger issue may be an unfamiliarity that exists about the electoral system, including its inception, process, and why it was chosen as the method of electing a presidential candidate.
The President and Vice President of the United States are not chosen directly by the people, but through electors
through a process known as the Electoral College.

It has been the manner in which every single U.S. President has been chosen as its foundation lies in Article II, Section I of the U.S. Constitution:

“Each State shall appoint, in such Manner as the Legislature thereof may direct, a Number of Electors, equal to the whole number of Senators and Representatives to which the State may be entitled in the Congress…The Electors shall meet in their respective States, and vote by Ballot for two Persons…they shall make a List of all the Persons voted for, and of the Number of Votes for each; which List they shall sign and certify, and transmit sealed to the Seat of the Government of the United States, directed to the President of the Senate. The President of the Senate shall, in the Presence of the Senate and House of Representatives, open all the Certificates, and the Votes shall then be counted. The Person having the greatest Number of Votes shall be the President.”

Each state receives electors based on the number of Senators and Representatives that it has in Congress. Those electors then vote on behalf of their state through a careful and transparent process. Such is the representative democracy of the United States.

If no candidate receives the 270 electoral votes needed to win, then the candidate who received the most total votes is elected.

Though they are not mandated to do so, electors will often follow the choice of the people or the party, which is why the popular vote usually coincides with the electoral vote.
There have been fifty-eight presidential election results, of which, four have not paralleled with the popular vote. Ninety-three percent of the time, the system has worked as intended.

That number may be satisfactory as an exam grade, but not for an election in the eyes of many students.

A constitutional amendment would be required to revamp an electoral system that can be viewed as antiquated and solely favorable to the elites of the country. And there is perhaps, more fervor about the issue than ever before.

If there was ever an opportunity to capitalize on dissatisfaction, this would be it.

Students have often been at the forefront of political and social movements. If the electoral system is ever to be subjected to change, it will be because the trend continued.