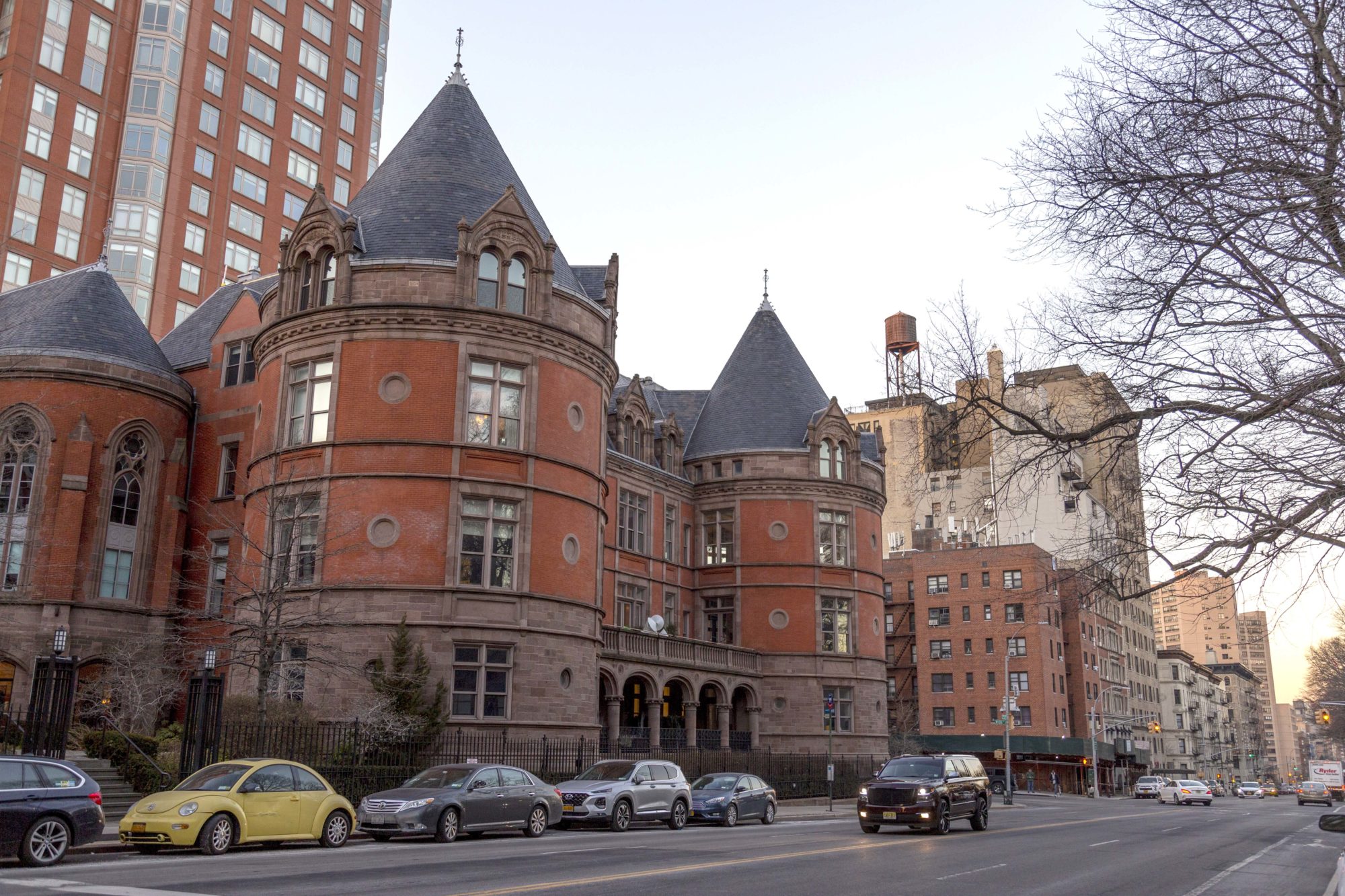 A quiet and peaceful air is what surrounds Central Park West between 106th and 105th streets, where the presence of an old-style structure stands majestically among the buildings of this less traveled Manhattan neighborhood.

Currently known as 445 Central Park West, this gothic-style building became a residential condominium in 2005. Walking by, it’s like an ancient castle with large windows, five rounded towers, a balcony and a small garden where a swing moves slowly with the winter wind. I feel insignificant and defenseless next to its overwhelming size, and everything around it looks mysterious and spooky. Perhaps, it is because within its walls contain many stories, including one of the most controversial cases in the 1970s related to Medicaid fraud in nursing homes.

Formerly known as The Towers Nursing Home, this building opened its doors in 1956 to 347 elderly people, who were looking for a quality care service to spend their last years of life. However, its operator, Bernard Bergman, took advantage of the vulnerability of patients to further benefit and enrich his millionaire empire. Bergman was an Orthodox Rabbi very famous among religious and political leaders. At the end of 1956 and the beginning of 1957, he acquired

The Towers through his companies West Par Realty Company, Inc. and B & B Holding Corporation. It marked a starting point since he became involved more and more in the nursing home business through family members, associates, and his company Medic-Home Enterprises.

Approximately 70 nursing homes in New York, New Jersey, and other states were part of his empire.

Edith Evans Asbury, the first female journalist in the city room of The New York Times, investigated this case for some of her articles. Her NYC-related papers were recently acquired by the LaGuardia and Wagner Archives, giving students, faculty, and the public access to her notes and articles. Some of the documents were written by Evans Asbury and some contain extra supporting information about the scandal. One of the reports was issued in 1975 by the Office of the Welfare Inspector General (OWIG) in New York State, which identified irregularities found in the accounting books of the care center.

According to the Analytics of Expenses section of the report, “OWIG’s limited audit of the Towers 1970-1974 books found that many expenses are not eligible Medicaid expenses for Medicaid rate-setting purposes.”

The most inconsistent expense recorded in this section is $6,982.50, which corresponds to the purchase of a car for use by Mark Loren, administrator of The Towers Nursing Home and a cousin of Bergman. In almost all his businesses, Bergman was involved directly or through some immediate or extended family member, leading me to assume that Bergman did not care about the consequences of involving his relatives in his businesses; he just wanted to keep his empire afloat.

The consequences were not long in coming. In August 1975, Bergman, his son, and The Towers’ accountant were indicted for stealing Medicaid funds for almost 4 years and overstating the expenses of the nursing home. Asbury used a press release from the Special State Prosecutor for Health and Social Services on August 5, 1975 as a main guide to report on the scandal.

“The State Grand Jury found that BernardBergman, Stanley Bergman, and Samuel Dachowitz allegedly filed false documents at the State Health Department for the Towers operation between 1970 and 1974 claiming $3,138,000. Of this sum $1,200,000 in Medicaid funds constituted illegal claims for State reimbursement,” the press release stated.

Among those expenses were payments to Anne Weiss (Bergman’s wife) and Shirley Katz for services rendered at The Towers. However, these services were never performed, and Katz was a secretary in the headquarters of companies owned by Bergman. Other expenses were charged to Sani Interiors, the company responsible for the cleaning and maintenance of the nursing home. Sani Interiors did not provide adequate maintenance of The Towers and was not an independent company, as Bergman claimed. It seemed to be part of Bergman’s empire as a means for making some secret investments.

This was only the beginning of deep investigations conducted against Bergman’s business and personal accounts. Bergman pleaded guilty of Medicaid and tax fraud on March 11, 1976. He was sentenced to a one-year state prison term and four months federal term, and he signed an arrangement to pay $2.5 million, settled all his assets, and withdrew the charges against his son, Stanley.

However, Bergman was not the only one involved. The scandal brought to light names such as Eugene Hollander, Bernard King, Charles E. Sigety and Hyman Solnick, who appeared in the Medicaid fraud trials. Those scandals forced the authorities to take immediate action to have more control of fraud cases and prevent them from being committed egregiously.

Three years later, on December 12, 1978, the National Association of Medicaid Fraud Control Units (NAMFCU) was formally created under the direction of the Special Prosecutor for Nursing Homes Health and Social Services at that time, Charles Hynes, who was also in charge of Bergman’s case. With its members representing 20 states, NAMFCU was formed in response to the Medicare-Medicaid Anti-Fraud and Abuse Amendments, a bill signed in 1977, intended, according to its official website, “to strengthen the capability of the government to detect, prosecute, and punish fraudulent activities under Medicare and Medicaid programs.”

Although both these programs provide useful benefits for elderly people in nursing homes, Medicaid covers a higher amount of long-term care expenses for a longer period of time than Medicare. Thus, the Medicaid program is an essential and important source of financial aid for seniors and their families in order to reduce their nursing home expenses. The importance of the program is evident by the increase in residents at nursing homes in the last 40 years.

In 1975, Evans Asbury reported that 95% of the 23,000 patients in New York’s privately owned nursing homes and health-related facilities received Medicaid, which amounted to approximately 21,850 patients. In recent years, the percentage increase is more than 200%.

The Henry J. Kaiser Family Foundation mentioned in a report published in June 2017 that six in 10 nursing home residents were covered by Medicaid and in 2015, 69,694 patients received Medicaid in New York State.

Therefore, due to the great dependence on the Medicaid program, NAMFCU not only has the great responsibility to take control, investigate complaints and perform due process when a fraud case occurs, but also must ensure that patients receive their benefits appropriately, without neglect or abuse.

“Total taxpayer costs are actually higher in Medicaid, than in Medicare, with total yearly expenditures for Medicaid of over $500 billion dollars,” Richard Stern, director of the program in charge of the Medicaid Fraud Units, noted in an informative podcast by the Office of Inspector General (OIG). “Fighting fraud in Medicaid can be especially challenging.”

According to the Control Unit annual report issued by the Office of the Inspector General in 2017, there were 10 criminal convictions and 11 settlements reported to have taken place in fraudulent homes, recovering a total of $179,507 and $1,244,577, respectively. This differs greatly from the six convictions related to skilled nursing facilities and home health agencies that Asbury reported in 1973, when no formal regulation existed.

The quick actions of the Medicaid Fraud Control Unit and the referral of those cases to The Office of the Inspector General allowed money to be recovered and even guaranteed the exclusion of care centers or defendants from the Medicaid program. The last semi-annual OIG’s report submitted to Congress with the information from April 1, 2018 through September 30, 2018 mentions that the most common fraud cases are filing false claims for reimbursement, similar to the case of The Towers in 1975. Unfortunately, recourse of that nature was not possible in the case of Bernard Bergman and The Towers Nursing Home.

Bergman retired voluntarily from the nursing home business amid charges. The building closed its doors in January 1975, before the fraud case was made public. Nevertheless, its old walls still keep the memory of a scandal alive and remind us that fraud cases are still a constant fight. They have not yet come to an end.

View all posts by Mariuxi Moran →