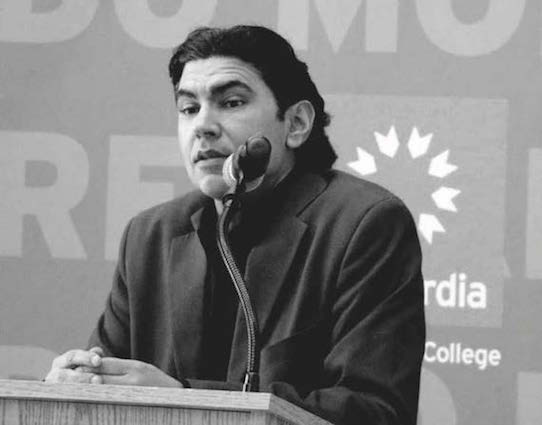 Coupled with the burgeoning diversity of Queens, LaGuardia Community College offers a broad landscape of cultural experiences. The Symposiums and conferences opens students to sights and sounds from around the world.

On March 28th 2016, the Latin@ Cultural Symposium was held at LaGuardia’s Pool Side Cafe. The program was designed to be a “multi- departmental celebration of Latino culture,” Professor Joy Sanchez-Taylor, the co-ordinator of the event, describes it. Four different departments participated: the English Department, the English Language Acquisition (ELA) Department, the Social Sciences Department, and the Fine Arts Department.

In an interview with professor Joy Sanchez-Taylor at her office in the Humanities department after the event, she described the culture of LaGuardia as, “students don’t identify with Latino as much as they identify with their home culture. So I’ll have students tell me I’m Dominican, I’m Paraguayan. You know, they don’t use Latino first. Although, mainly the term came out of the need to have a better term than Hispanic… It’s more inclusive… But you still have Latino, Chicano, Latin American; there are all these different terms that people use to identify themselves.”

The conference started off with a reading from the play Locura written by Mike Marrero. Based in Key West in the early 60s, Marrero’s play weaves a tale of magical realism harkening back to the bygone days of the island, “before the rich white people came from up north, before the cruise ships and their herds of cattle roamed the streets, before the island reinvented itself all sanitary and clean… Back then everything was wide open in every possible meaning of the word.”

“Everything I’m about to tell you is true,” the play begins.

The story starts with a cock-fight behind a church gone wrong, followed by an adventure of an uncle and his nephew evading the cops, getting stranded on Monkey Island, running into an exiled priest, and more. It is told fast, in Key West dialect, recounted as an angry and fond memory. There was a full performance of Locura in LaGuardia’s

Little Theater after the conference; if you would like to see the play, you can find it for free on Vimeo by searching for Locura, hosted by Mike Marrero.

Student poets were up next. Kimberly Morales, whose poem “Untitled” is featured in this issue’s poetry corner explores double-consciousness, the stereotypes of society, the history of colonialism and Latinos, and how all of these things play into shaping the culture of being Latina in America.

Bernardo Torres, the resident poetry editor of the Literary LaGuardia magazine, read some of his works after.

The symposium then opened up into a panel discussion. Moderated by Hugo Fernandez, a professor of art and photography at the school, the Arts panel was a joint presentation and discussion between three professors and one student. Chris Schmidt, an English professor at LaGuardia, opened the panel, displaying Vik Muniz’s ‘Pictures of Garbage,’ explaining the aesthetics of Global Poverty. Ernesto Menéndez-Conde, an ELA professor at LaGuardia, followed with a presentation on Contemporary Cuban art and Neo-Liberalism, and after, the panel was wrapped up with Ageela Semple, a graduate of LaGuardia currently studying Human Biology with a focus in pre-med at Hunter College, presenting, “Doris Salcedo and Visual Anonymity: A Response to the Colombian Artist’s Exhibition at the Guggenheim Museum.”

The panel that followed was a discussion on Latin American Feminism, moderated by Lauren Navarro with a mixture of student and faculty presentations. Ana Maria Hernandez, an ELA professor at LaGuardia, started the talk with a discussion of Cirilo Villaverde’s Cecilia Valdés, a work of literature that is important for its focus and thought-provoking ideas on the subject of race and class in San Jose, Cuba. Vivian Hercules, a student of Spanish/English Translation at LaGuardia, with a literary analysis of Isabel Allende’s Daughter of Fortune, focusing on the role of women in society and the sundering of cultural norms.

Shaunee Wallace, an assistant professor of Communications at Laguardia, continued the discussion of feminism and cultural identity with her presentation labeled “Latinegra: the Other Latina.” Wallace focused on her family and how, “unfortunately, there are instances of colorism, racism, discrimination and overall resistance of acceptance from some White Hispanics/Latinos towards Black Latinos in some of these countries and even here in the United States,” as explained in the program.

Bronte Walker, an International Studies student at LaGuardia, closed out the Feminism panel with a paper titled, “Malinche Unmasked: Visual Representation, Chicana Feminism, and Mexican Identity.” The focus of the paper was on the national figure of Malinche, the translator, guide and lover of Hernán Cortés, and how she is depicted through popular art. The images vary from the victim in Jose Clemente Orozco’s 1930’s oil painting to a figure of power from 16th century chicana feminists.

Mariah Sánchez and Viguens Louis then performed an abbreviated version of Luis Valdez’s Las Dos Caras del Patroncito (The Two Faces of the Boss). The skit takes place on a farm, with a worker asking for better pay and conditions, and the landowner claiming that it is simply not possible; it would cut into his profits that his father worked hard to produce. The owner and the laborer then switch roles, so the owner realizes the hardship of the employed farmers and is forced to do their tasks. The play was originally created as a piece of social commentary, and toured through the fields and flatlands to help build solidarity amongst workers and provide the push for unionization.

The Latino symposium finished out with a teaching Latin@/Latin America panel. Lauren Navarro, a professor of English at LaGuardia, moderated the panel, and Juan Recondo, theater professor, with his students Jacquise Burkett and Luisa Alarcón began the presentation, expounding on “Latina/o Theatre and Performance: Discussing Identity Politics in the Classroom.” They were followed by Liena Vazyman, a professor of Fine Arts at LaGuardia, who touched on the topic, “Latin American Photography at LAGCC: Progressive Pedagogy and Visual Literary,” and the panel was concluded with Rebecca Tally, a professor of History at LaGuardia, discussing “Examining Underdevelop- ment in the LAGCC Classroom: The Case of El Burrito and Rural Youth Education in Colombia.”

Professor Sanchez-Taylor said, “the takeaway is that especially, for both our Latino and non-Latino students to discover just how diverse the Latino population is [at LaGuardia]… Latino students [make up] 43% of the population here. That’s the largest ethnic group on campus, but again, it gets into the problematics of how people define Latino.”