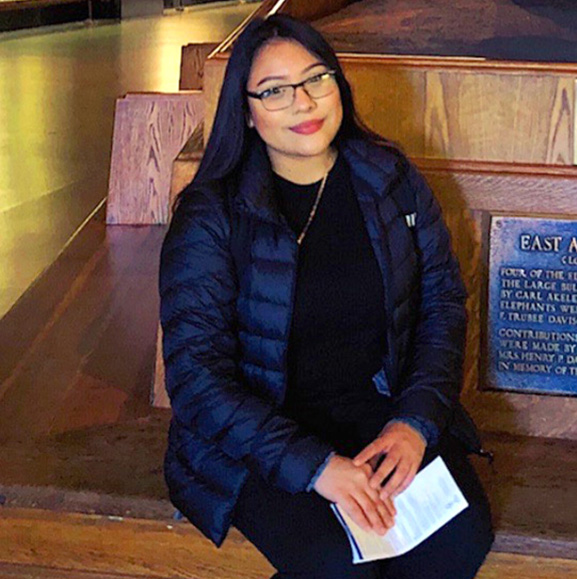 Learning various English skills along with the principles of journalism to become the next great reporter providing truth and facts to citizens takes a toll on many journalism students. Jailene M. has closed the gender gap through various experiences and hopes to empower the next generation of tech leadership by succeeding in school while also learning the basics of the digital era.

It was 5:30 pm on a Sunday when I met Jailene for a cup of coffee, in Elmhurst, Queens. She was on her laptop while drinking coffee and rubbing her eyes, probably because of the brightness of the screen. I tapped on the door while she looked and enthusiastically waved at me – I opened it, and in an instant, she gave me a hug. She mentioned how she had already ordered exactly what I wanted and as I sat down, she was already telling me how grateful she was about my interviewing her — this was her first time.

Of Mexican descent, born in Queens, Jailene is not only an aspiring journalist, but also a technology enthusiast, a coder, a babysitter, a first generation and full-time college student at LaGuardia. She is proud of her roots and where they’re leading her and for what the future looks like it has in store for her, after studying the basics of coding in the courses she has taken with an eye towards creating her own website and publishing articles along with other first-generation students. Her main goal is to close the gender gap and become the next tech leader.

Jailene is majoring in New Media Technology with a concentration in Digital Journalism. According to Jailene, her main goal is to become as digitally adept as possible while also providing the truth to citizens through an application or a website. Jailene enjoys coding in her free time and teaching others, one of strongest skills.

“I like seeing how just typing codes can turn into beautiful websites, and just seeing what that can turn into has attracted me more to it, and made me want to learn more,” she told me while sipping on her large hot latte.

Surrounded by video games growing up, Jailene developed her interests in technology at a young age. She has the chance of making something virtual into her own masterpiece, a website that can get the recognition she hopes to attain. While learning the ways around coding she has noticed that she is the only Hispanic woman in her class.

“I thought this only happened in Mexico! I guess this stereotype will continuously follow me even in the United States!” When she realized that she decided to go against the stereotype where men are usually the only ones involved in technology and familiarize herself with coding and breaking the misconceptions of women not being able to master this computer language. During this time she has also practiced blogging, reporting and interviewing in addition to attending web design classes.

“Look, I’m more focused on HTML Coding, learning JavaScript, jQuery, CSS, Bootstrap and there’s so much more. I would show you, but I think I’d confuse you so much. Maybe we can stop!” She laughed while closing her laptop and again sipped on her latte.

Jailene is a shy woman who is very passionate about her studies. But more than that, she cares about the people who want her to pursue her dreams, particularly her little brother. What is of great concern to her is proving her family wrong back home. Her everyday motivation is to become part of the next generation of top talent in technology, to promote diversity in the future and support innovation.

She also gets her inspiration from her little brother who has been diagnosed with Attention Deficit Hyperactivity Disorder (ADHD), a mental disorder that is neurological and those who develop it have difficulty paying attention and become excessively active.

“My brother is 10 years old and has ADHD,” Jailene said. “This really does motivate me in accomplishing my academic and personal goals because I want him to know that he can accomplish anything he wants no matter what his condition is. I want him to know that the medication he is taking, and this disorder does not define him and does not limit him to what he can do.“

Her family back in Mexico wants the best for her, especially since she is the first granddaughter and is seen as an example. Many first-generation college students say they must go to college to help their families because they are viewed as saviors, family representatives, and a way out of poverty. She is dedicated to doing well this term while remembering to take care of herself.

Part of the graduating class of 2019 she hopes to see that stigmas between genders will no longer exist in the future, in technology or any field. “Sometimes it is women competing against women or men with men, and I just do not understand it, and it continues to frustrate me. We can all just help each other succeed. But again, that’s not how it works here in America.”