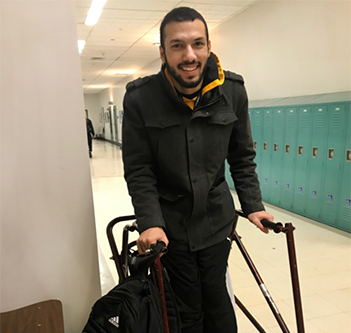 Developmentally disabled Yasser Saleh does not let the stigma that surrounds the idea of being disabled define who he is.

Yasser Saleh, 19, was born with cerebral palsy, a congenital disorder due to abnormal brain development, which affects the movement and posture of a person.

“If you had a car, and [its] wheel doesn’t have an alignment—that’s basically what I have. That’s why I wear (leg) braces to keep me and give me some stability,” Saleh said.

Cerebral palsy is a common disorder in the United States. Experts say there are more than 200,000 cases in the US per year. Because of Saleh’s condition, he had to consider a lot of things before going to a college.

“I would have to deal with so many other things besides regular school things, like a cab, because I’m a disabled student. It affected my decision making on how [people] would treat me and stuff—accommodation wise. I called LaGuardia, and they said they have a disability department and that it was okay [for me to apply]. I just wanted to try college to be honest with you because I’m not a big school person,” Saleh said.

His experience at LaGuardia is a fresh start that he is not all familiar with, “It was hard for me in the beginning. Because I was in a special education class (since 4th grade) so when I came here, there’s no such thing as that. So the adjustment from you having so much time to learn on one thing to learning something in everybody else’s pace is hard,” Saleh said.

Saleh pursues his interests at any opportunity he gets.  When he is not on campus, he is doing a podcast on the side. “It’s a wrestling podcast. I saved up a lot of money from last year, and I just started it in September. It’s called, The Chokehold Podcast,” Saleh said. He came up with the idea when he met a friend, Derek, from his MAT 095 class, who shared the same interest with him. Saleh is continuously working on having a good content to gain more audience. “Good content is good content. If it’s good, people are going to [listen] to it, even if it’s not good, it would still be good for somebody,” Saleh said. Everyone can listen to Saleh and Derek’s podcast on Facebook and Podbean.com.

Everything Saleh does is something that he truly enjoys working. Apart from the podcast, he is also working on his first rap album. “I don’t write physically, but I have a microphone that I plugged into my laptop. I just speak, and it types for me,” Saleh said. Google Docs make it possible for Saleh to write his thoughts, as the system does voice typing for him.

Saleh wrote his first song and is currently working on the beats. He wants to make five songs for his first album. “At first, the rap thing might come, (or) it might never go anywhere, but at least I can say that I did it,” Saleh said.

“As much as I’ve achieved, there’s still more than I can improve on. I always remind myself to stay modest,” he added.

Saleh remains grateful and seizes each day with a positive outlook. “I got to wake up in the morning, and I’d tell myself, ‘Oh wow, I’m alive.’ And I’m happy. That’s a win for me,” Saleh said. He gets his enthusiasm by doing simple things, “To me, accomplishing simple things, like putting on my shirt, my pants, and my braces, I feel like ‘wow,’ I never thought it’s gonna happen. I can tell myself, ‘I made this self-improvement, nobody can’t take that away from me.’ When I passed my Math remedial, I never thought that was gonna happen, but then I did it. That’s the best reward system; genuine accomplishment,” Saleh said.

Saleh was a lot better than where he was. Until 16, he needed help with showering, putting on his clothes, and having his mom help him go down the stairs. “To me, life is all about stages. I was at a stage where I needed a lot of help, and now I don’t. If I don’t need help, then I’m not gonna ask if I need help, I’m not gonna abuse it,” Saleh said.

When meeting people, Saleh has a way to engage with people quickly by breaking the ice. “I try to make people laugh…it’s easier. Self-deprecating humor is hilarious. I make fun of myself so I that I break the ice, and so that people can think that I’m more open and can approach me regularly,” Saleh said. It may sound easy, but to Saleh, it is still a working process. He remarked that not all people are like him because has disabled friends who would rather stay at home. “They don’t want to put up with these kinds of stuff the way I’m putting up with right now. They don’t want to put up with ‘not being approached;’ they don’t wanna put up with ‘not getting accommodations.’ Some people don’t want to have to deal with [those problems],” Saleh said.

Saleh hopes to write a book someday that talks about human rights, particularly with Americans with Disabilities Act of 1990, a civil rights law that prohibits discrimination based on disability. His concerns are for disabled people who do not get enough help with their needs. “That’s just an unfortunate reality of a situation. When I’m the only who is the most vocal person, and there’s not a whole contingency behind me. There’s no pressure on people to make changes,” Saleh said.