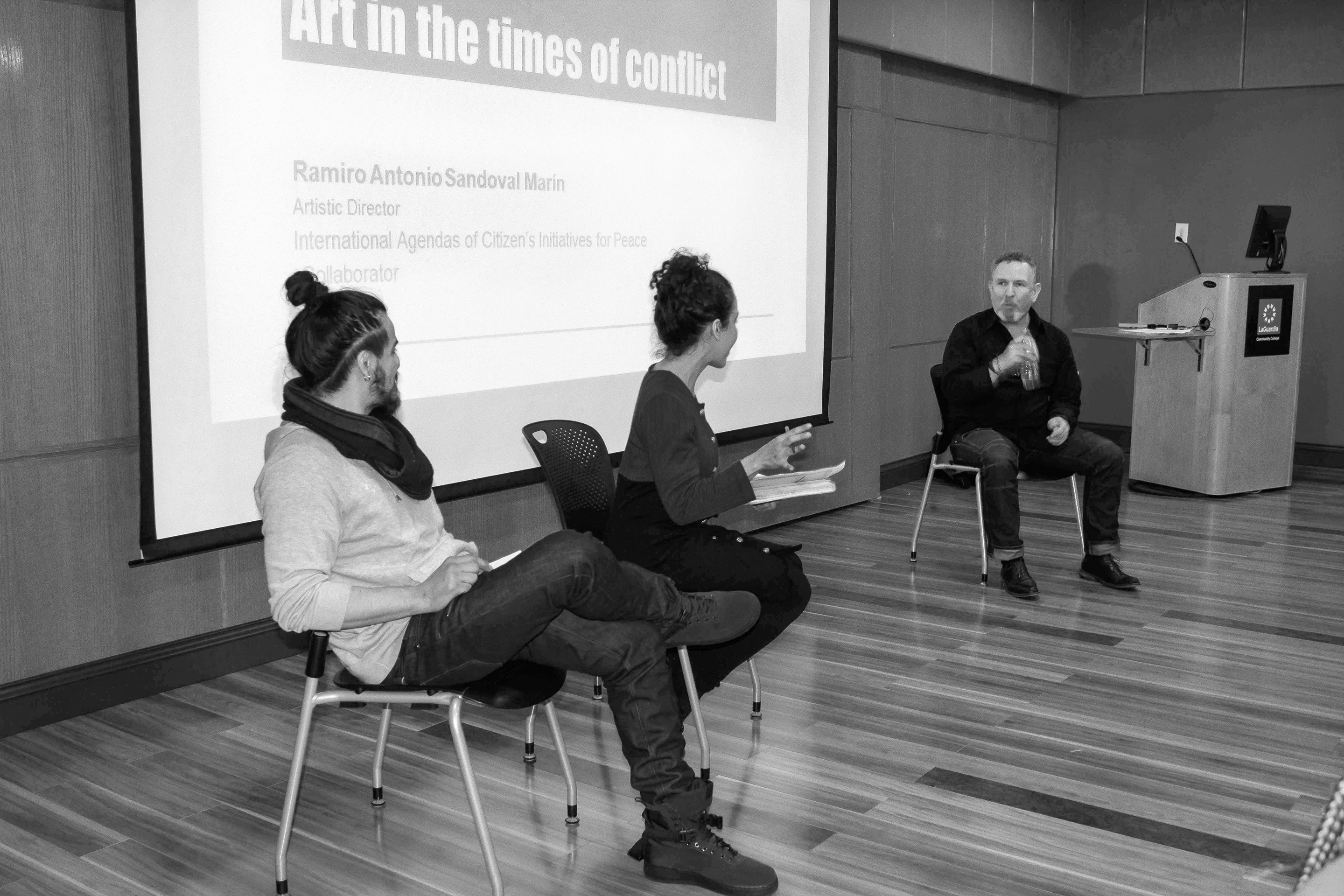 Ramiro Sandoval, the co-director of the Theater for Peace Project, was recently invited to LaGuardia Community College to speak about how he has fought and continues to fight for peace in his home country of Colombia.

For quite some time, Colombia has struggled to find peace with the Colombian rebel group known as the FARC (The Revolutionary Armed Forces of Colombia, abbreviated in Spanish). Founded in 1964, the FARC were mainly composed of small farmers and land workers who came together to oppose the inequality in Colombia at the time. This inequality stemmed from the Colombian government selling large portions of land to private owners to pay off its debts. Due to these levels of inequality, when FARC formed, they had a heavily Marxist-Leninist-inspired vision of society.

Just a little over a year ago, the government of Colombia negotiated a peace agreement with FARC, ending what was more than 50 years of civil war. FARC members turned in all of their weaponry and have returned to their lives as civilians. Colombia is still struggling to recondition and resettle former FARC members into its civilian population.

Mr. Sandoval and the Theater for Peace Project have made it their mission to help these ex-guerrilla members. “In October 2016, the President [of Colombia] didn’t have to do it, but decided to submit [the agreement] to a referendum… At the time, there was a hurricane of pro-peace activists in the Caribbean part of Colombia. It probably had to do with a very strong opposition to the peace agreement. The opposition created fear. They would say things like if there was a peace agreement, the guerrilla people will come and start creating Uber and they will get rid of everybody’s taxi’s and people will lose their jobs. They said that women will lose their husbands because the guerrilla women had better bodies because they’ve been training in the mountains. Seriously crazy things like that,” Mr. Sandoval said.

Mr. Sandoval described how and why the Theater for Peace Project was established. He said, “I mentioned that I collaborated with the International agendas of Citizens’ Initiative for Peace… After the referendum, many became discouraged by the rumors and wanted to give up, and the peace was in danger… one of our tasks was to create a portfolio of all the activities we’ve been doing in Latin countries and tell the folks from both sides, ‘We are listening. Please do not quit, do not fail, do not give up.’ Being in Habana, I was able to draft a few ideas. One of them was the execution of projects for peace like civic arts, music, dance, and mainly theater.”

He explained the role and importance of theater in society and the peacekeeping process. “For the Greeks, theater was a healing process. In society, we have all these things; hunger, violence, cruelty, rape, crime, but theater could penetrate into the darkest tones of terror and despair. To be able to show that there is always light in the darkness; that theater helps put together the members that are dismembered. [It ensures that] the names that would otherwise be thrown away are remembered in a ritual.”

While explaining his experience working in a mix of both everyday students and ex-guerrilla members in his theater class, Mr. Sandoval said, “the most interesting thing is how people, how students feel when they know they are working with someone who is an ex-guerrilla, a combatant. Someone who was in the jungle for over 10 years, killing and running away from being killed. How would you feel?” Mr. Sandoval asked the audience comprised mostly of students. The room went into a semi-silent state with few whispers as everyone pondered their answers to his question. As Mr. Sandoval’s presentation continued, he threw a curveball at the crowd that halted even the lowly whispers. “How would you feel, if I were to tell you, for example, that with me, today, to this class, I invited someone who was a warrior, who has been face to face with death, …who was a combatant. Who is among you and is trying to feel, trying to see if they can become a student right alongside you.”

He continued to hint that the situation wasn’t so hypothetical. He gestured that his mysterious guest that was sitting in the audience was an ex-guerrilla member. There was only silence and a bit of tension before LaGuardia Community College student Ambar Castillo answered, “I would be in awe of the difference, the diversity of their experiences, and just try to recognize their humanity. Trying to come to grips with what it would have been like for them, which is impossible…”

More and more students answered Mr. Sandoval’s question with positive feedback. “I would honestly applaud her (Mr. Sandoval’s guest). It takes a lot of courage for her to come all this way from being an ex-guerrilla member to trying to learn, trying to educate herself,” said another student, who preferred to remain anonymous. Before any attempts of outbursts, Sandoval quickly revealed that it was all a ruse. His guest was actually an actress named Erica on an internship with him for the Theater for Peace program.

Mr. Sandoval cares about keeping peace in his home country of Colombia. He works hands-on with several Colombians, whether they’re former FARC members or not. By using his passion for theatre as a platform for peace, Mr. Sandoval shows that anyone can make a difference in their community.