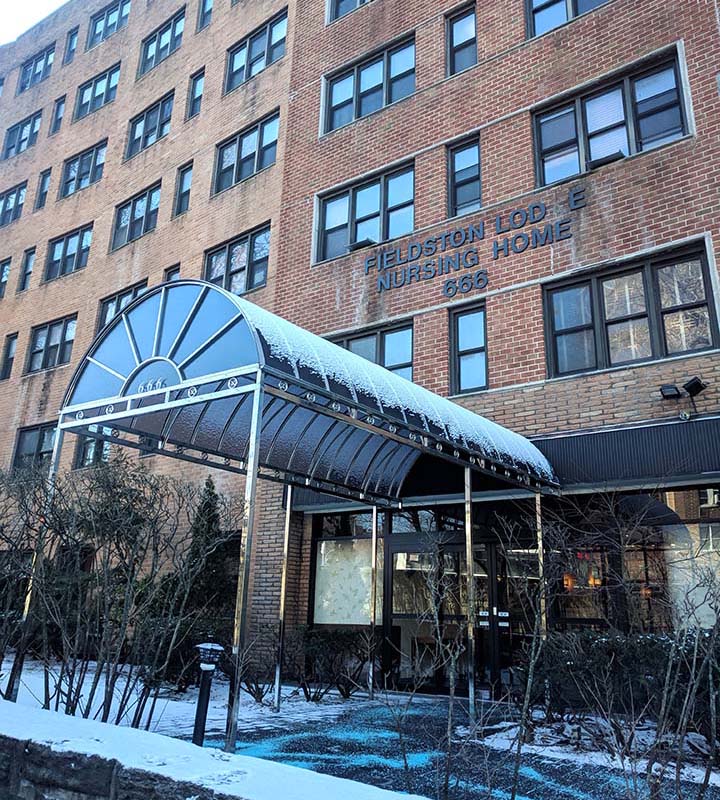 “Home is a shelter from storms—all sorts of storms,” reads one of the pictures on the wall at CCNS Northside Senior Center, and the cheerful atmosphere makes it clear that this place truly is a haven for the people who frequent it. This happy scene isn’t the case in all senior centers and nursing homes, currently, nor in the past.

The history of senior centers and nursing homes across New York City has a long and complex backstory. It twists and turns through the decades and changes with the people and regulations of the city. In 1975 the renowned New York Times journalist Edith Evans Asbury, best known for her local reporting about community issues, wrote a series of articles about fraud, violence, and mistreatment within the elderly care system. Asbury’s outrage over the blatant exploitation of the aging people in New York was heard loud and clear, as her stories held the attention of the public eye throughout the entire year.

According to a New York Times article byAsbury, Medicaid, a federal and state funded program that offers help with medical costs for people with limited incomes, initially rolled out with a budget of 532 million dollars to fund the nursing home care portion of the program in 1965. Given the option of costly home-care or financially supported nursing home care, families usually opt to put their loved ones in the capable hands of care aides and medical professionals. Another New York Times article from 1973 by Peter Kihss reports that by 1972 about 82 percent  of beds in New York’s nursing homes were being occupied by Medicaid patients, which meant that the initial budget set for Medicaid couldn’t keep up with public demand.

With Medicaid struggling to pay for all their enlisted patients, and nursing home owners exploiting the Medicaid program for financial benefit by exaggerating the numbers in their books, patients suffered under lousy living conditions because of under-compensated and overworked staff. Judging by the number of complaints and public outcry seen in media coverage in 1975, degraded patient care in New York City’s nursing homes was a citywide concern and Edith Evans Asbury was in the trenches, typewriter at the ready, fighting to improve the system.

Recently, the LaGuardia and Wagner Archives, a repository for the storied documents of New York City housed at LaGuardia Community College and open to the public, acquired Asbury’s documents with reportage, research and notes. These never before seen archival documents shed light on the public outcry regarding the deteriorating conditions of New York City nursing homes. Undiscovered amongst Asbury’s donated documents survive news briefs from the New York State Department of Health with the bed counts and deficiency lists of nursing homes from all over the state of New York. Of the nursing homes inspected and listed by the New York State Department of Health, most had between 100-300 beds and deficiencies ranged from justifiable administrative issues to more threatening nursing, dietary, physician, and housekeeping deficiencies.

Asbury’s documents also contain letters from distressed members of the public that reached out to The New York Times for help with the dire conditions in the nursing homes their loved ones were living in.

In one letter from 1975, a woman writes about a surprise visit to her mother with Parkinson’s disease at “The Jewish Home of Chronically Ill”: “When I arrived at the nursing home it was lunch time, and I found my mother in her wheelchair, dressed in a ragged hospital gown, her hair uncombed, trying to desperately eat her lunch while the flys [sic] enjoyed themselves trying to eat her lunch also. At first, I didn’t recognize my own mother as she had become skin and bones in so short a time.”

This disturbing account of what should have been a happy reunion between mother and daughter is not the only letter written to Asbury to expose deplorable conditions in nursing homes.

In another letter addressed to The New York Times, The Washington Post, and two New York senators, a Mr. George Katz speaks of a home that was restricting their patients to only six overnight home visits with their families per year and demanding written notice of the visit three weeks in advance. After close inspection of the memorandum from the nursing home issuing the directive about the restricted home visits, Mr. Katz could find no reasonable explanation of why his father was being held against his will at the nursing home and started to look into the Medicaid policies for clarification. “…I did discover that an unoccupied bed–even for one night—is not reimbursable by Medicaid to the nursing home,” explains Mr. Katz in his letter, trying to make sense of why his father’s freedom had been taken away without reason. These two stories are not anomalies, however, as Asbury’s articles spoke of inspectors’ highly critical reports being suppressed by their superiors, and nursing home aides being indicted for theft and assault in homes that are still in operation to this day.

In June 1975, Asbury wrote about the indictment of a nursing home aide charged with hitting a patient in the face at Park Nursing Home on 128 Beach 115th Street, Rockaway Park. At the time, Park Nursing Home had 280 beds and inspectors had noted shortcomings in their rehabilitative, social, and dietary services. Park Nursing Home still exists today, and even though they have cut down their bed count to 196, according to the 2014-2018 overview by the New York State Health Department, their percentage of complaints per 100 occupied beds is 108.2 percent  which is abnormally higher than the recorded statewide average of 47.5 percent .

Google reviews on Park Nursing Home speak of overmedicated and zombie-like patients, while others note impressive social and rehabilitation services. The New York State Department of Health rate the nursing homes they inspect on their preventative care services, quality of care, quality of life, resident safety, and resident status based on a star system where one star is the most unsatisfactory score. With overall quality reports from the Park Nursing Home averaging three stars, neither unsatisfactory nor superb conditions are to be expected.

In 1975, Asbury also wrote of another case in which a bookkeeper allegedly stole more than $46,700 from the Fieldston Lodge Nursing Home, a home that is also still up and running.

According to Asbury’s notes, the Fieldston Lodge Nursing Home had 200 beds in 1975, and according to the last inspection from September 2018, this number hasn’t changed.

Inspectors from 1975 reported deficiencies in their administrative, nursing, dietary, and physician services, but no citations were warranted for those categories of deficiency between the years 2014 and 2018. An overall rating of four stars was given by the New York State Department of Health, and public review on Google averages at 3.1 stars with a comment from December 2018 calling the home “terrible,” but another comment from around the same time called it “nice and clean.” Although these reviews do give insight into the average experience of the people who have dealt with the nursing home, they should be taken with a grain of salt given the nature of online reviews.

Asbury’s articles and the letters written to her seem to be a long way away from the cheerful pre- Thanksgiving feast scene at the CCNS Northside Senior Center run by Catholic Charities- Brooklyn and Queens. “This place is a godsend for this community,” says Teddy, a 73-year-old retiree, and the unofficial ambassador of the CCNS Northside Senior Center. On the wall beside him is a notice board with the events and activities that are planned for the week, and as he eagerly recounts the meditation and Zumba classes, people slowly start showing up for the anticipated Thanksgiving lunch. Teddy greets everyone who walks through the door with a warm familiarity that shakes off the frosty air from the freshly fallen snow outside.

“Elderly people in this neighborhood are dwindling because of landlords. People don’t have rent control, so they can’t live in the neighborhood,” explains Teddy. Since the gentrification of Williamsburg, rising rent prices have been a major concern for elderly people living on pensions and relying on programs like Medicaid to help save money where they can.

“This place helps people get by day by day. They have food that’s well proportioned. Exercise classes. There’s something here for everyone,” he says happily. Later, in the festive dining room,

Teddy’s friend Allan joins the conversation, and when asked why he frequents the senior center his reply is simple. “I have fun here,” says Allan, shrugging his shoulders as if it’s silly to think there is any other reason.

Elderly people from the Williamsburg community visit the CCNS Northside Senior Center daily, but other members of the community are also involved in keeping the center running as efficiently as possible. Senior centers and nursing homes have some differences in that senior centers traditionally don’t offer people a place to stay; senior centers provide a place to get a healthy meal and to enjoy community activities. Although providing around the clock care requires more resources, both of these institutions exist to help people in their senior years enjoy their lives as retirees and grandparents.

While titles of articles from the last year from The New York Times speak of “The Broken Promises of Nursing Homes” and still tell stories of understaffed and overworked aides, there is some hope for better care on the horizon.

The New York Times recently reported on Green House Homes, a new alternative to the hospital-esque care facilities that come to mind when we think about nursing homes. Here residents are free to eat their meals when they feel like it, wake up whenever they please or roam the gardens outside their windows with any of the ten other residents of the home. Green House Homes claim that studies have shown models like these are the preferred method of care for most patients, and although these methods save Medicare about 30% per resident per year, they do charge patients more than the average nursing home.

With only 242 Green House Homes compared to more than 15,000 nursing homes in the country, these alternative senior care facilities still have a long way to go, but as we know, even the biggest revolutions have to start small.

Wouldn’t it be great for all of us to know that one day, when we’re old and gray, we have a place to go where people know our names and greet us with love? Wouldn’t it be comforting to know that we didn’t have to spend our golden years roaming lifeless white corridors for someone to help us with our daily needs? Wouldn’t it be lovely if all of us could look around at our nursing homes one day and say, just gleefully as Teddy did, “This place is my home away from home”?

View all posts by Zilla Tofte →