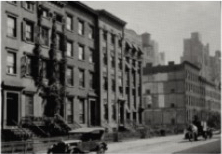 Eight years ago Chelsea resident and LaGuardia Art and Architectural History professor Fern Luskin noticed steel girders going up on a four- story building in her neighborhood. She was immediately concerned with the change. “All of the homes on that side of the block have always been four-story row houses,” she said.

After two months of extensively researching the building in the Lamartine Place Historic District, Professor Luskin found out that it had been a stop on the Underground Railroad. Since then, she has spearheaded a fight against the owner of the house to preserve its integrity.

“Preserving Lamartine Place (the 29th Street Historic District) means preserving a snapshot of that community in the middle of the 19th century that was so vibrant with abolitionists,” Professor Luskin said.

On Feb. 24th, the last week of Black History month, Professor Luskin and Hopper-Gibbons supporters were victorious in a court case opposing Tony Mamounas, owner of the building at 339 W. 29th Street known as Hopper-Gibbons House. The Manhattan Appellate Division of the New York State Supreme Court ruled in favor of the preservationists seeking to remove an addition to Manhattan’s only documented and landmarked stop on the Underground Railroad.

The ruling stated that Mamounas, the owner of the historical site would need permission from the Landmarks Preservation Commission (LPC) to complete the insertion of a fifth story. The ruling also allows for Friends of Hopper-Gibbons House preservationists to request that LPC order Mamounas to demolish the out of place addition he has made to the building.

During her research, Professor Luskin found out that 339 West 29th Street was occupied by Quaker abolitionists Abigail Hopper Gibbons and James

Sloan Gibbons before and during the Civil War. They used their house to hold meetings with other abolitionists to help runaway slaves on their way to Canada, and to protect free blacks from slave kidnappers.

Professor Luskin became adamant about having the fifth story removed because the Hopper- Gibbons house was attacked by a white mob and set on fire during the 1863 Draft Riots. The Hopper-Gibbons family escaped the riots in the middle of the night by going up to their roof and maneuvering across the even roofs of neighboring houses on W. 29th Street. They sought refuge at the Hebrew Orphan Asylum at the end of the block. Many people were upset with the abolitionist work that the family conducted, as the country was in turmoil with racial and class issues.

Professor Luskin also found that the Hopper- Gibbons family owned the house next door, where Abigail’s father, Isaac Tatum Hopper, an abolitionist and prison reform activist, lived. He also owned another four-story building in the East Village named the Isaac T. Hopper Home of the Women’s Prison Association. That building and the Hopper-Gibbons House were landmarked simultaneously in 2009. It is now a halfway house for women who were incarcerated or homeless.

In the fall of 2010, Mamounas began to construct a fifth floor on the historic building without seeking a permit to do so. During the hearing, Professor Luskin provided proof of the date stamped photos that she had taken of the roof of the Hopper Gibbons House prior to the construction of the fifth floor.

Mamounas being aware of the historical significance and the landmarked status of the building, had the opportunity to petition the Board of Standards and Appeals within a certain time frame in order to pursue his fifth story project. According to Luskin, Mamounas missed his window of opportunity to legally carry out the development of the extra floor and in 2010 he defied an order from the Department of Buildings (DOB) to correct the unwelcomed addition.

the fate of Hopper Gibbons House remains unsettled as Mamounas can still find a legal way to continue his project. Even though this is a victorious moment for Professor Luskin and Friends of Hopper-Gibbons House, there is still more work to be done.

He can request special permission from the LPC to finish the fifth floor apartments. However, Luskin confirmed that she and other preservationist are in the process of contacting elected officials to petition the LPC for the removal of the fifth story addition, which remains in place. The scaffolding is still there.

Professor Luskin’s journey to preserve the integrity of the Hopper-Gibbons House has inspired her to try to solve other issues in her community. She is now using her new found resources to combat other public issues that she is passionate about. “I have become an activist because of this, my campaign to preserve Hopper-Gibbons House,” she said. “When I get a little less busy here, I would like to teach a course on this because I learned so much.”

View all posts by Zatanya Cooke →