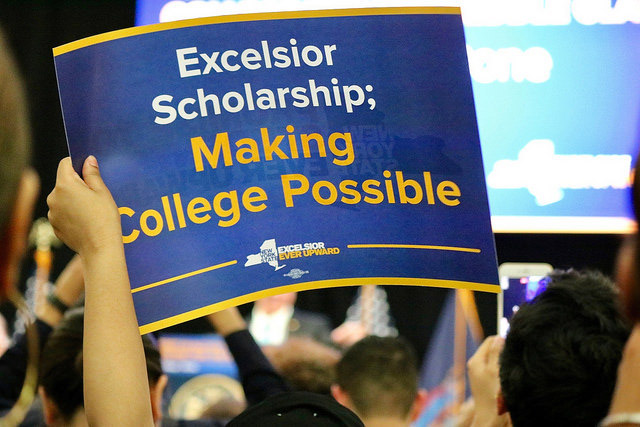 According to the NYS Higher Education Services Corporation, “The Excelsior Scholarship, in combination with other student financial aid programs, allows students to attend a SUNY or CUNY college tuition-free.” Though, just like most financial aid services, there are specific eligibility qualifications to be granted the scholarship.

Students who apply for this scholarship must be a resident of New York State (NYS) and have lived in the state for twelve months prior to submitting an application; they must be a U.S. citizen or eligible non-citizen; they must have graduated from high school in the United States, earned a high school equivalency diploma, or passed an “Ability to Benefit” test; they must have a combined gross income of $100,000 or less; they must pursue an undergraduate degree at a SUNY or CUNY college; they must be enrolled for at least 12 credits per term; complete at least 30 credits each year, and if they attended college prior to 2017-18, he or she must have at least 30 credits.

“One of the objectives of this scholarship is to provide middle class income families with an opportunity to attend college tuition free. Tuition are direct costs. For example, with LaGuardia, the tuition rate for an in-state student is $2,400; however, LaGuardia has fees as well. So how the excelsior [scholarship] would work, if the student is not eligible for any Pell and or tap awards and only excelsior, they would get what the tuition cost is per semester.” says LaGuardia Community College’s Financial Aid manager, Annette Hamilton. One questionable requirement mentioned by many LaGuardia Community College students is that those who complete their degree successfully while being funded by the scholarship, must remain in NYS for the amount of time that they were enrolled. Otherwise, the scholarship would then convert to a loan.

Ms. Hamilton says, “This is free money. These are funds you do not have to repay. Okay, the only drawback is that you have to live in New York, but who doesn’t want to live in New York. So, I don’t see a majority of our LaGuardia students moving out anytime soon if they were to get the scholarship.” Lori Hughes, the Associate Director of Student Financial Services responds “But you know, they’re not stuck here either depending on how long they receive the scholarship. Here at LaGuardia, that’s only two years and two years go by fast.”

Douglas Webber from Fortune Insiders argues “It can encourage undesirable behavior, such as incentivizing an unemployed recent graduate to stay in New York and consume safety net services rather than taking an entry-level job in another state. A $30,000 tax is a powerful reason not to move.”

The director of LaGuardia’s Accelerated Study in Associate Programs (ASAP), Ramon De Los Santos says, “For a lot of them, it doesn’t make sense for them to apply for the Excelsior Scholarship because we will cover the difference and if they need to apply for any other reason, if they don’t qualify for any aid at all, those are the ones that might qualify.”

Though with the ASAP program is available to students that do not qualify for full financial aid, “[Excelsior Scholarship] works similarly to ASAP financially. ASAP would cover the difference that financial aid wouldn’t cover. ASAP provides [additional support such as] money for books, academic support, [and a] metro card per semester.” says Ms. Hamilton.

As a result of restricting only full-time students to apply, David Brandt, a former LaGuardia student and now Student Success Mentor says “I think that it’s an amazing first step. But I think the Excelsior scholarship also ignores a lot of the groups that have been ignored like wartime students and coming from a place of [being] a part time student and has worked their way through college, I find it rather outrageous that this scholarship does not offer aid to part time students because often times they are the ones that are most in need.”

“I think that it’s an amazing first step. But I think the Excelsior scholarship also ignores a lot of the groups that have been ignored like wartime students.”

Joanna De Leon from LaGuardia Community College’s Women’s Health Center states “I would love for it to have been open to everyone. It’s a serious thing. You’d like the opportunity to have it open to everyone, but stipulations and limitations are put in place for certain reasons. I would let it be for a lot of the DACA kids because they [have largely contributed] to the productivity of this college, and just like the acronym says they’re “dreamers,” and this foundation has been built on immigrants. They built this city. They built this country and anyone who says otherwise doesn’t know their history.”

Reported by the New York Times, “The talk in many quarters about Mr. Cuomo seemingly had more to do with 2020 — when his purported, if oft-denied, presidential ambitions might bloom.” Mr. Brandt responds by saying “Well, I think this is a very political issue and there might be a chance of that, possibly. I think he would be a good contender to replace our current president.”

According to Mr. Santos, based on a report conducted by LaGuardia’s Financial Aid Office, “About 250 students in the entire campus qualify for the Excelsior Scholarship. About 15-16,000 students attend LaGuardia.” Ms. Hamilton still suggests “Everyone should apply to every financial aid program that is available even if they think they aren’t eligible. They should never assume they are not eligible.”