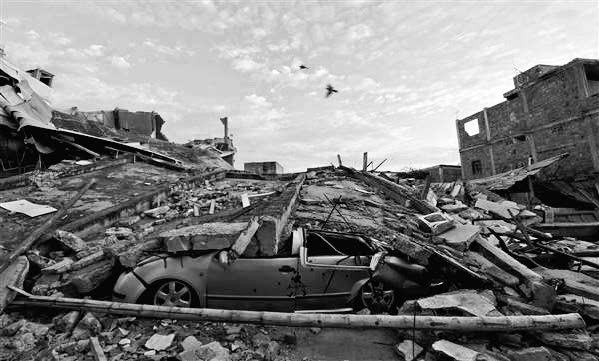 A powerful earthquake hit the coast of Ecuador killing more than 650 people and leaving thousands of families devastated and homeless.

According to the United States Geological Service (USGS), the earthquake registered at 6:58pm on Saturday, April 16, with a magnitude of 7.8 in the Richter scale. The president of the Republic Rafael Correa said, “It is the worse tragedy in 67 years,” after the earthquake that took place in Ambato in 1949.

The epicenter was between the cities of Pedernales and Cojimies located in the north of the province of Manabí, in the northwest part of Ecuador. However, other coastal provinces as Guayas and Esmeraldas also felt the tremor. The capital of the country, Quito, located 105 miles away from the origin of the quake, registered a strong trembling as well. Due to its magnitude, the border countries of Colombia and Peru also felt the shock.

In the beautiful touristic cities of Perdernales, Cojimies, Manta and Portoviejo, hotels, houses and public buildings collapsed, and many towns suffered power outages for extended hours. “It is not the collapse of a house, but the collapse of an entire people,” said Gabriel Alcivar, the Mayor of Pedernales. Moreover, in the city of Guayaquil, a colossal bridge collapsed over a car occupied by two individuals who died in the moment of the impact. Airports in several cities were closed for a couple of days. In total, 654 people died, from which 20 were foreigners, more than 12,450 people were injured, 113 people were rescued alive from under the debris and about 25 thousand people were sheltered.

Authorities tried to send help immediately; however, most of the roads that connect Manabí with the rest of the country were severely damaged blocking the pass of police, firefighters, military and rescuers. Countries around the world sympathized with Ecuador and more than 20 of them sent their humanitarian help including a thousand rescue specialists and disaster assistance. Ecuador’s Defense Minister acknowledged that rescue labors would not have been as successful as they were without the help of all those knowledgeable people, that now Ecuadorian consider their heroes.

As the days passed, the anguish of the survivors grew trying to find their relatives. However, the rescuers everyday had less hope of finding someone alive. In fact, the smell of decomposing bodies was stronger every day. Authorities were concerned about the lack of hygiene and the many diseases this could bring. As hope was running out, the drive to find more people alive was the strength that had rescuers going. This was the case of Pablo Cordova, a man who was buried under the debris for almost two days, but never lost the hope of being rescued. Nevertheless, more people were unearthed from under the rubble even four days after the incident, when hope was almost null.

Pablo Cordova was the receptionist at “El Gato” hotel that collapsed the day of the earthquake. Together with his family, he now celebrates his rescue, after being under the debris for 40 hours and drinking his own urine to satiate his thirst. His wife, Sonia Zambrano, had lost the faith in finding the 51-year-old receptionist alive; she even bought his coffin. Now, the first thing in her “to do” list is return that coffin. “I’m the only one that was found alive under the hotel debris and I think it is a miracle from God,” Pablo said, while nar-rating the story of how he found a lantern around his feet, and it helped him to see at least what was around him. He describes how desperate he felt having his cellphone in his pocket and not being able to use it because of the lack of a signal. “I turned off my cellphone to keep the battery alive,” he said. His tranquility was interrupted when he heard the machines removing the debris from where he was, “I thought, I survived the earthquake and now they are going to kill me with those machines.” At that moment he turned on his cellphone and miraculously he was able to make a phone call. “It was Monday, I had been there for two days already. I called my wife and she didn’t answer.” In despair, he tried to call the last number he dialed before the catastrophe and that person was who answered, and he reached out for help. He was rescued safely, with signs of dehydration, but free of wounds.

In the days following the earthquake, habitants could not have peace because of the hundreds of replicas they had to suffer, about 700 replicas, many of which were of magnitude 6 or more. The Geophysical Institute of Ecuador reported that the replicas could continue not only for days, but weeks and even months. In fact, last Wednesday, May 18, at 3:35am, the Ecuadorian population woke up because of a horrible shock. According to the Security Minister, Cesar Navas, even if the magnitude of the last quake was 6.8 and the epicenter was in a different city; it was a replica of the earthquake in April. Fortunately, the new tremor did not leave severe damage. Structures that had already been affected just collapsed without burying any more people and one person died after being hit by a fleeing car.

After the rescue effort, the President of Ecuador and the Ecuadorian Consul in many different cities of the United States asked people for help to take care of the physical needs of the people that were affected. All the resources that Ecuador had were about to end and there were still a lot of people that needed medical attention. Food was scarce, and people started to be desperate.

Fortunately, the response of the Ecuadorian citizens in Ecuador and outside the country was fast and donations were numerous. Supermarkets in cities like Quito and Guayaquil had its shelves empty because of the demand of people that bought products to donate. Famous people organized concerts and charity events that raised thousands of dollars, and presidents from other countries donated millions that will solely be used for the reconstruction of houses and sources of employment.

Victims are grateful they survived, but uncertain of what will happen next. In final declarations the President Rafael Correa stated that Ecuador would take years to recover, and it will cost more than 300 million dollars to rebuild all the damaged structures and create employment for people that lost everything.

The unity and humanity of the Ecuadorian population called the attention of many foreign news reporters that were covering the incident and many more other people that traveled to Ecuador to help. People keep sending donations and helping their compatriots to get ahead, because they consider that together they will rise again.

“One day I will tell my grandchildren that I was born in a country [Ecuador] that hug each other so hard, that it never shook again”

View all posts by Sharon Vega →