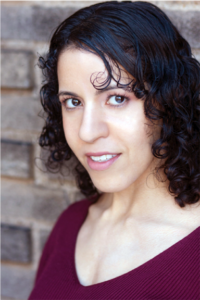 When a person hears a loud and bouncy voice around LaGuardia’s E-Atrium or somewhere in the connecting hallway between E building and M building, that’s probably Ambar Castillo’s high and bubbly energy transmitting throughout the campus.

It was 5:40 p.m. on a Monday when I met Ambar at her office, CREAR Futuros, which means “To Create Futures” in Spanish. Ambar is an employee of CREAR Futuros, a program that provides an exclusive opportunity to aid Latino students’ paths to success. I was already inside the office waiting for her when I heard some knocks. Through the glass window of the door, I saw her beaming and enthusiastically waving at me—I opened it, and in an instant, she gave me a welcoming hug, all while carrying with her an enormous backpack that probably weighed more than she. She was out of breath as she ran from the second class of the day and told me that she was grateful that I had waited on her. She still had one class to go at 6 p.m.

Of Dominican descent, born in Brooklyn, and raised in Queens, Ambar Castillo is not only a writer, but also an actor, a peer advisor, and a full-time student, who gave up her 12-hour-a-day full-time job so she could be an active LaGuardia theatre student.

Ambar has been attending LaGuardia Community College since 2016. She works three different part-time jobs on campus, including her role as a Peer Advisor who strives to support students in attaining their academic goals.On a regular basis, Ambar helps communicate with mentees to connect them to resources based on their needs and goals, letting them know about specific scholarships, events, employment/ internship, and more.

Hersy Lazo-Varo, a Recreation Therapy major and one of Ambar’s mentees mentions, “My experience with Ambar was amazing. The best experience I had was participating in a CREAR Futuros event with her. I really enjoyed coming because it helped me to talk and meet with professionals, and I had the [chance] to network with them.”

Growing up, Ambar developed her interest in social activism by witnessing her father, Julio Castillo, getting passionately involved in tackling the issues of social justice in India. Her father was an activist, who was greatly involved in the time of the Balaghat dictatorship in India. “He would secretly give out pamphlets and [held] secret meetings with activists,” Ambar said. She recalled an iconic photo of her father, who was raising his fist and looking like he was delivering a big speech. “He looks like he was holding a rifle, but it’s actually a flag of the Dominican Republic,” Ambar added. She also gets her inspiration from her hard-working mother, Angela Castillo. Her mother reminds her that whatever a person desires in life, as long as one does not give up, there is always the possibility of achieving it.

Ambar has a Bachelor of Arts in Latin American Studies and Journalism from Boston University. She came to LaGuardia to follow her creative pursuits that were once intensified by the experience at the teacher’s training she conducted in her previous job, Success Academy, one of the largest charter school organizations in New York City. She put together skits, and played a part in the production.

Her passion for theatre and journalism has been reflected in her work, especially when she won the Pulitzer Fellowship Award in 2017. The Pulitzer Center is an innovative, award-winning non-profit journalism organization dedicated to supporting in-depth engagement with underreported global affairs. Last year, Ambar traveled to India for three weeks to report on the way Indians practice activism. She mentioned that through initiatives such as theatre and dance, the women were able to address women’s issues, health, gender inequality in the workplace, and especially sexual harassment, which is prevalent in India.

Recently, she received a prestigious Fulbright Fellowship Award. The program offers research, study, and teaching opportunities in over 140 countries to recent college graduates and graduate students. Ambar will go back to India for one year right after her graduation from LaGuardia in June to continue reporting on human rights, and women’s socio-economic and harassment issues. All expenses, including travel, transportation, food, lodging, and other project related expenditures, will be paid for by The Fulbright Program.

“It’s been a dream of mine [to be granted the scholarship] since I discovered it,” she said excitedly.

The importance of connecting with people shows in every work and personal relationships Ambar creates. “That’s part of my mission, to inspire this passion to passion dynamics and these connections,” Ambar says.

Despite all the drudgery and long hours of studying Ambar does, her energy to help and connect with others never ceases.

There is no other person I have ever known or heard of with as much energy [as Ambar]. It will be 10 o’clock [at night], and most people are tired at that time, but that has never stopped Ambar from offering rhymes, editing help, and laughs for her friends. Lorenzo Brea, Political Science major.

Ambar’s candid and convivial character makes it easier to build a bond with her mentees. “She wanted to know about me, and appreciated every perspective and opinion I shared,” Mr. Brea says. Beyond that, Ambar constantly offered help in all stages of his first semester in LaGuardia. “Just a conversation with this woman will restore your faith in genuineness, diligence, and happiness. She makes me want to be as great of a person as her,” Mr. Brea adds.

Her lively personality spreads to the people she meets and works with. Jonathan Custodio, former Editor-in-Chief of The Bridge, mentions, “I have never met someone like Ambar. Her palpable passion for deep connections, theatre, and public health is contagious and illuminating.” Ambar and Mr. Custodio collaborated in producing strong and relevant articles for The Bridge in the past semesters. “She strives to be as open-minded as possible, taking risks and putting herself in positions of discomfort to better herself and those around her,” he adds.

When asked how she managed to do several tasks—working three different jobs, while being a full-time student, she gave me a sincere smile and said, “I think a lot of students of LaGuardia, who are also full-time are also working and doing lots of activities.” She lightly laughed as if recalling the people she knew who are also hard workers and as passionate as herself. “I guess when you know you have this passion, you can communicate that to yourself and keep that as fuel to motivate you to keep going, then it makes it possible. Because it’s not just work; it’s work for something bigger than you are.”