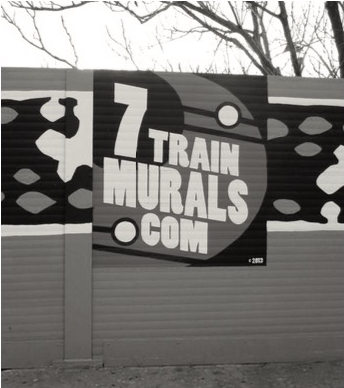 QUEENS, NY – Walking across the Thomson Ave bridge you are confronted by a site that is now a far cry from the industrial construction look of the past. Bedecked in color, the bridge now holds the design of local artist and social activist, Mark Salinas. Inspired by the tread designs on shoes, and connecting the whole 125-ft mural, the largest mural in the Queens area, with a shoestring, Mr. Salinas spent his summer beautifying the local neighborhood.

According to Mr. Salinas, all of the materials and funding came from a community effort. With donors like Janovic Paint, Citibank, Publicist Group, and LIC Partnership, the 7 train mural was able to get off the ground. Mr. Salinas was the lead designer, but the painting can be accredited to the com percent volunteer-based, with many of the students and other painters coming in with little to no experience.

“It is all a part of the process,” Mr. Salinas states, reclining easily in his chair and waiting for the interview to be over so he can run across the street to pick up paint from Janovic to cover up a recent tag that marred the mural. He takes on the full responsibility of clean up, buying the touch up paint out of pocket. The oversight, he says, comes from the community. There is a network set-up of people who send him texts to let him know about the defacing of his art, which he is eager to patch up.

As often comes with a community run event, there are only good stories to tell about the process of putting together a huge work of art. Recounting one memorable event, Mark told me about a man who saw the work being done and pulled up his car. After inquiring into the nature of the project,

the man produced a twenty dollar bill for Mr. Salinas, and, flourishing a smile, told him to add it to the pizza for workers fund. Another time a young girl walked by on her way to work and was so enthralled by the idea that she hurried back with a box of free doughnuts. Over 25 percent of the work force came from people who walked by and were interested, Mr. Salinas explains, noting the power works of art can have in bringing a community together.

While the act of painting only took nine volunteer days to complete, the whole project was a year in the making. Beginning by applying for grants and researching a design, Mr. Salinas had to dedicate long hours to a site specific project that could have been stalled in the infant stages. Luckily for us, his hard work paid off. Describing his process, Mr. Salinas joked that his neighbors probably think he is crazy, as he has scaffolding installed in his apartment to hold all of his supplies, and is usually up working into the late hours of the night.

After he got his design accepted by the Department of Transportation, the winner out of thirteen applicants, Mr. Salinas had to go through several processes. The first stage of development, he explains, is priming the background color to remove the weather damage and make the wall uniform. After that he had to spend several days on step two, drawing the grid outline. The design is composed of two foot by two foot squares, with 33 panels overall. When it came down to the final stage, the painting of the panels and the finishing of the mural, Mr. Salinas says that over 100 volunteers stopped by to help.

If you would like to see more of Mark Salinas’ work, you can go to 7TrainMurals.com, follow his twitter handle of @7TrainMurals, or his Instagram account 7trainmurals. He just finished up a mural at the local YMCA on Queens Blvd where he worked with a local Boy Scout troop, and is currently looking to find an indoor project for the winter.