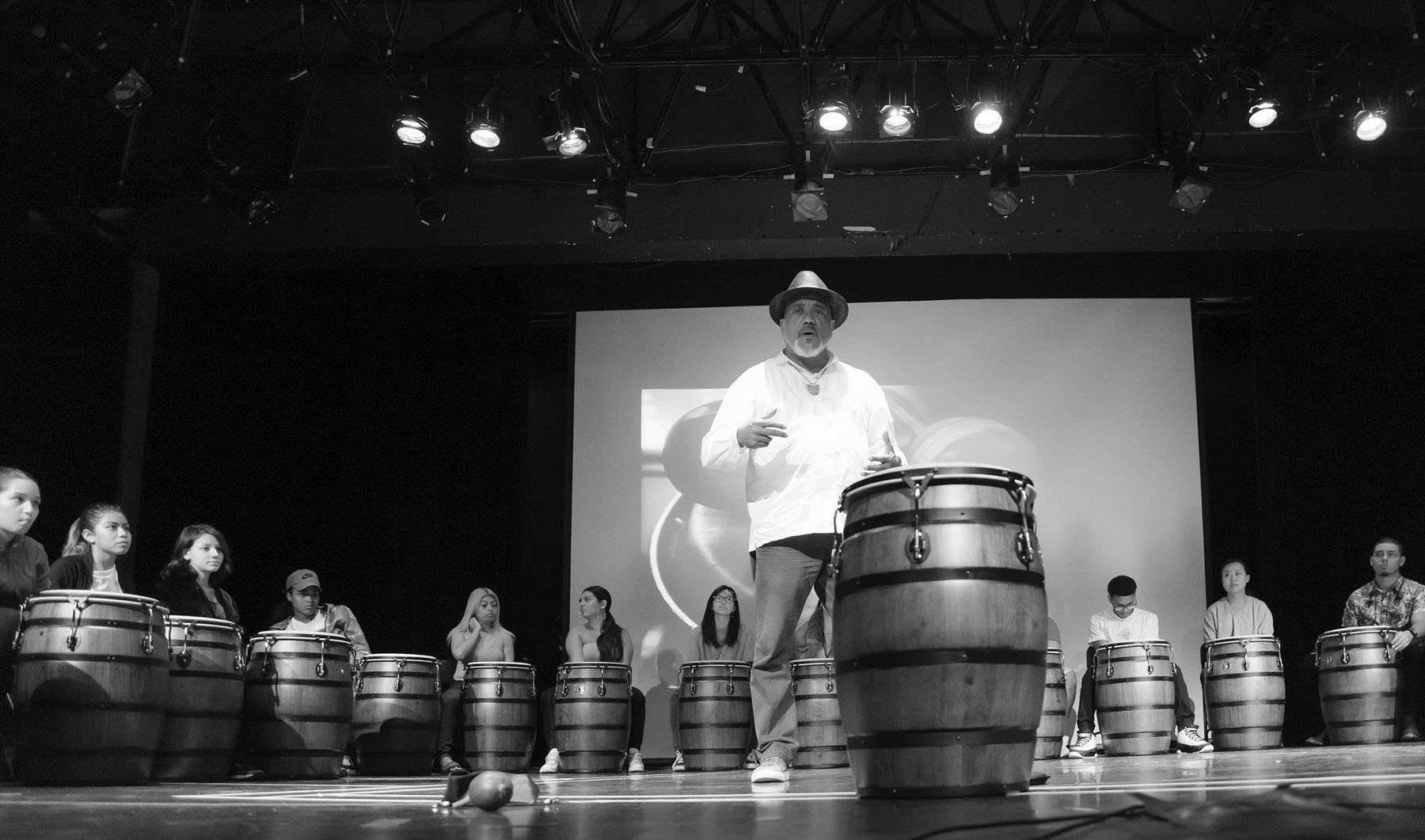 Different colored lights illuminated the drum-filled stage. Two bright-red maracas sitting atop a barrel drum graced the screen, foreshadowing what was to come.

The Hispanic Heritage Celebration 2018, titled “From Bomba to Salsa: Puerto Rican Folkloric Music and its Influences on Modern Music” opened with a Latin Percussion Workshop from 10:00AM-12:00PM on October 10th 2018. Dr. Drum, co-founder of BombaYo, a community enrichment organization, educated the audience on the culture and history of bomba. The genre, bomba, is a traditional Puerto Rican style of music comprised of percussion, dance, and song, described by Dr. Drum as “my soul… my food” and “a way of life.” The event was held in LaGuardia’s Little Theatre and was hosted by Professors Will Fulton and Hugo Fernandez.

Donning a white button -up shirt, a fedora- like black hat, and a seemingly permanent smile, Dr. Drum, aka Jose Ortiz, began educating the audience about the history of bomba. Looking back at him were students and faculty alike, filling the dark theatre with their eyes, permanently fixated on the centerstage.

The passion in Dr. Drum’s voice only grew as he began to discuss the role colonialism had played in the ostracization of bomba and those who practiced it. He spoke of a time in Puerto Rico when under Spanish rule, owning a barrel drum was outlawed, as was owning a Puerto Rican flag. Johnny Colon, cua player and bandmate of Dr. Drum, shared the story of his father being arrested for having a barrel drum during those times. “The family used to get together and do that [bomba] and somehow the Spanish authorities got word that my father had these drums.” He continued, saying “they arrested my father… [they outlawed] anything that had to do with resistance, and the drum was seen as a tool of resistance.”

The stage was set with twenty bomba drums. Nineteen were spread in a semi-circle across the stage, these were the puliadores, which control the bass. The twentieth was the primo drum and was set centerstage, waiting for the right moment to be used. Volunteers from the audience filled the puliadores and Dr. Drum began instructing them. The brave volunteers struggled at first but after brief and concise instructions from Dr. Drum and some unison counting, the impromptu performers began to find their inner bomba drummer. In perfect synchronization, the puliadores filled the theatre with a contagious bomba rhythm. They were ready.

Dr. Drum demonstrated a “paseo” in which a dancer would gracefully pace around the stage in anticipation of the improvisation portion of the dance. Pacing around the stage, he stops, looks at the empty primo drummer space and bows in respect as though someone was sitting there. Dr. Drum then took his place as the primo drummer, instantly enhancing the rhythm played by the puliadores. Bomba had taken over the theatre, but a volunteer was still needed to dance.

In no time, Professor Hugo Fernandez was on stage accompanied by Dr. Anna Maria Fernandez, first trying paseo, then enthusiastically improvising while being followed by Dr. Drum. Cries of laughter and encouraging applause surfaced from the audience and visibly energized the dancers as they alternated between simple steps, pretty good moves, and the most unexpected cartwheel of all time.

The entire audience of the Latin Percussion Workshop left that event with a new understanding of bomba, Puerto-Rican history, and even themselves. “I’m not Puerto Rican but today I’m Puerto Rican” said Darryl Davis of Student Affairs encapsulating the general feeling of the audience. Through bomba, the audience was taken on a journey to a time of oppression, but also a time of resistance and celebration. “When you start looking at yourself and your ancestors, that’s the real wealth,” said a reflective Dr. Drum in closing.

A few days after the Latin Percussion Workshop in the Little Theatre, Dr. Drum was scheduled to appear at the Jazz Museum in Harlem, New York. An interview was arranged, giving us a deeper look into the mind of the co-founder of BombaYo.

The intended message of the performance, he explained is “knowing and finding yourself.” Finding “the evidence of our ancestors”, which is “in our music”. Dr. Drum, who has personally taught bomba to special education classes, articulated the importance of adding music to the curriculum. Describing the “transformation” that he witnessed when the children interacted with the drum, he said, “they are recognized as drummers, they are recognized as cultural artists when they’re drumming.” “We need this,” he continued, equating bomba to a form of meditation. “When we drum it’s like a musical massage…drumming elevates your consciousness.”

View all posts by Josue Villatoro →