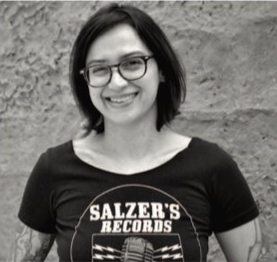 The first time I met Professor Claudia Moreno- Parsons was in 2013, when she was teaching my LIB 200 class. I can recall nervously sitting in the classroom for about 10 minutes wondering who was going to teach this class I knew nothing about, but when Professor Moreno-Parsons walked in, a feeling of relief came over me. Wearing a red plaid shirt, with the sleeves rolled up, exposing the tattoo sleeves on both arms, blue jeans, and a pair of royal blue and yellow Nikes, Professor Moreno- Parsons was anything but your typical English professor. Her presence was a welcome relief after the 10 minutes of anxiety, and I instantly realized that for the next 12 weeks this was my professor, and that Professor Claudia Moreno-Parsons might impact me beyond the curriculum. I was right.

Recently, I met with Professor Moreno-Parsons in her office to discuss her recently published book Amiri Baraka and Edward Dorn: The Collected Letters, and quickly realized that, despite an inspiring conversation about her book, LaGuardia students should know about Professor Moreno- Parsons and the impact she is trying to make on campus.

Born and raised in Brooklyn, Professor Moreno- Parsons is a lot like the students she teaches. With Bachelors and Masters Degrees from Brooklyn College, and a PHD from the Graduate Center, Professor Moreno Parsons understands what her students experience within the CUNY system. She is of Puerto Rican and Italian descent, which puts her in some of the same shoes as the very students that sit in her class, that come from various cultures, and backgrounds in a city like New York. Professor Moreno-Parsons does her best to ensure that the student body has the opportunity to expand their education, beyond the curriculum by giving them an outlet outside of the classroom.

In 2012 Professor Moreno-Parsons founded the SWAG (Studies of Women and Gender) Committee, (now called the Women, Gender and Sexuality Studies (WGS) Committee, along with a group of English Department professors who were immediately committed to this effort. Her observations of what the student body needs to further their education here at LaGuardia is special. Professor Moreno-Parsons effort has not gone unnoticed. Professor Kimberly Ramirez, who hosted SWAG’s second Women’s Literary Salon, says she “saw a need to increase both faculty and student interest in teaching and learning the work of women writers. Students are now acquiring some smart strategies for approaching both literature and life.” In 2013, Moreno-Parsons also hosted and helped to organize the “Women in Science Fiction” event, which highlighted books, films, and various other types of texts to illustrate that women are creating important and thought provoking science fiction material. She is using her enthusiasm for education to provide students with the inspiration to achieve more.

These endeavors aren’t restricted to the classroom, and although she is constantly challenging her students, Professor Moreno-Parsons has also challenged herself to achieve more. During her time at The CUNY Graduate Center Professor Moreno-Parsons was a member of The Lost and Found, a group which was founded by her mentor Ammiel Alcalay. The group is dedicated to seeking and publishing literature that has been lost, through a series of chapbooks. This was where her work for the book Amiri Baraka and Edward Dorn: The Collected Letters began. The book consists of a series of correspondence between two poets, Amiri Baraka and Edward Dorn, during the early to mid-1960’s. The letters between the two poets were very descriptive of the times, and show how two men, especially from different racial backgrounds, see the world during the civil rights era. For Professor Moreno-Parsons the exposure of these letters is important for various reasons. She believes, “The dialogue was honest and in the minds of men who showed genuine interest and concern in the direction the country was going in.” The letters might be over 50 years old, but Professor Moreno-Parsons believes that they are still relatable to this generation. “The political landscape is so similar, with war mongering, and the culture of fear that gets perpetuated, is the same now as it was then, the same conversations still are happening. So people can relate because they see that it’s happened. They can go back and see that even men like Amiri and Dorn had the same concerns that they have today.” Moreno- Parsons book won the PEN Oakland Josephine Miles Award for Excellence in Literature (2014).

She hasn’t revealed the makings of the book to her students and this naturally exhibits her desire to not make her classes about what she has accomplished and instead about what her students accomplish. That didn’t stop me from asking her what her students take away from the text and what they can learn about any other writers and poets that she teaches. She responds, “it gives students insight on how writers work and it’s interesting to see the messiness of these letters. I think it’s important for students to see that, because that’s one of their biggest concerns, which they get penalized for. But it’s important that they see it like a first draft, and how you can still get your message across from that.” Many students would appreciate this attitude, and knowing that a professor supports their process, goes a long way in the mind of a student.

Once our conversation was finished, a few other things stood out to me from her office—a poster of The Beatles 1966 Revolver album, an array of family photos, and from her computer the smooth sounds of John Coltrane’s Lush Life. I realized that Professor Moreno-Parsons stands out not just because of her tattoos, and style, but because there is a genuine love for what she does. The students that have the pleasure of having her as a professor will benefit from that love beyond the halls of LaGuardia Community College.

View all posts by Jonathan Gomez →